Last week, Yahoo announced the launch of its News Digest app for Android devices. The company has also made the iOS version available for all users worldwide by adding Canadian and International editions (it was originally only available to iOS device users based in the United States or United Kingdom). Using algorithmic and human curation, Yahoo News Digest provides news round-ups twice a day, each story presented with a collection of articles, maps, Wikipedia entries, videos and photos. 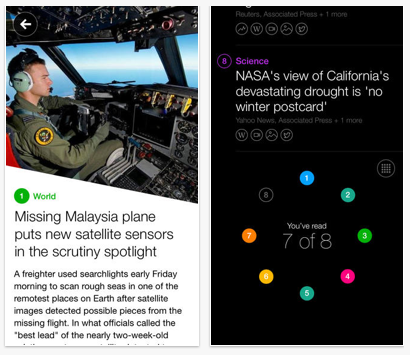 The service was initially launched earlier this year, based on the startup Summly that was created by British teenager Nick D’Aloisio. Yahoo acquired Summly last year.

“When we launched the Yahoo News Digest in January for iPhone users in the United States and United Kingdom, our goal was to ensure that our audience is ‘in the know’ of the top news and information in the shortest amount of time, all while giving them a sense of completion,” wrote D’Aloisio, now product manager for Yahoo News Digest, on the company blog.

“We received an overwhelming response, with 40 percent of those who downloaded the app coming back to it on a daily basis. Encouraged by the response, we are now bringing the experience to more people around the world.”