Will the iPhone 5s Lead To a Sea Change for Mobile Gaming?

Donald Mustard, co-founder and creative director of Chair, developed “Infinity Blade 3,” tried it on the iPhone 5s, and was impressed by how it played. While gaming on Apple’s new iPhone, Mustard discovered much more than he expected. The game had more color, improved resolution and better graphics. A new game-friendly smartphone may generate interest from children and teens who are gaming more on mobile devices, and at younger ages.

“The ‘Infinity Blade’ developer recently got its hands on the new, high-end iPhone that Apple unveiled [on Tuesday], and began to put it through its paces, trying to figure out what the device was capable of,” explains Polygon. “He expected an upgrade, sure, but not the kind of year-over-year leap in power that he discovered.” 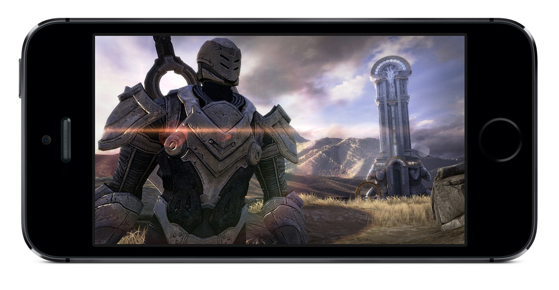 Chair is a division of Epic Games, which is creator of the Unreal Engine that scales PC and console games down to mobile devices. Typically, many of the graphics and features from high-end systems are not possible on mobile devices.

Based upon his experiences with the smartphone, Mustard believes that the iPhone 5s with the new 64-bit ARM processor is about twice as fast as the previous model. The iPhone 5s is a preview of what is coming, he suggests.

“I really do think this is a sea change,” comments Mustard. “It’s a sea change from how much of a supercomputer this thing is that we’re holding in our pockets.”

Apple used “Infinity Blade 3” to showcase the new phone for several reasons, notes Quartz. First, most gamers are adults and are passionate fans of mobile gaming. Second, as gaming moves from consoles to mobile devices, future gamers may be iPhone users.

Today, young consumers are gaming almost equally on mobile devices and PCs and consoles, according to an NPD Group survey. Since 2011, the average age of children gaming on a mobile device has decreased from nine to eight, with the amount of time spent among teens (ages 12 -17) has grown by 40 percent, from five to seven hours per week.