Yahoo’s mobile team in New York City has a developed an app that turns traditional channel surfing into a more intuitive experience with a swipeable interface for browsing and discovery. The iOS app serves as a mobile home for original video content from Yahoo and its content partners, while a side bar allows navigation between other Yahoo apps such as Mail, Flickr and Fantasy Sports. Yahoo Screen already offers more than 1,000 hours of comedy programming, sports, news, movie trailers and more.

“The app allows users to browse through trending clips, search for specific shows, and includes gesture-based navigational controls — for example, swiping left and right skips between the episodes, while swiping up and down flips through channels,” reports TechCrunch. “The idea, the company explains, is to re-create the feeling of channel surfing on the TV on mobile.” 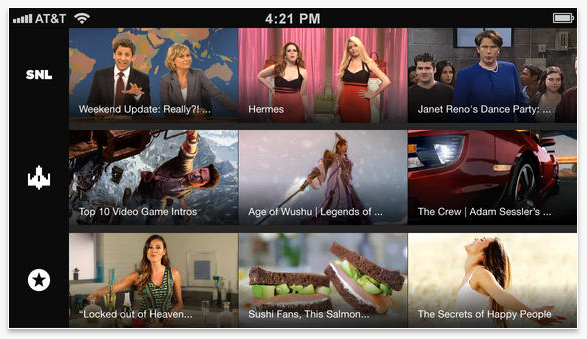 Yahoo also announced a deal with Viacom this week that provides clips from Comedy Central shows such as “The Daily Show with Jon Stewart” and “The Colbert Report.” The app currently features content from Saturday Night Live, ABC News, Wired, The Onion, GQ, Vogue and others.

The company has an extensive lineup of original comedy, including “Ghost Ghirls” with Jack Black, “Burning Love” (a “Bachelor” parody), “Losing It With John Stamos,” a dark cops-and-drug-dealers sendup starring puppets called “The Fuzz,” and shows featuring names such as Cheryl Hines, Gillian Jacobs, Zachary Levi and Ed Helms.

“We want Yahoo Screen to be a place where you can customize your experience to your liking while continually discovering new things to watch and share,” suggests Robby Stein, director of product management, on the Yahoo Blog. “We hope to make Yahoo Screen the destination for the world’s best video creators and their awesome content.”

The Yahoo Screen app is currently available for Apple’s iPhone, iPad and iPod touch. You can check out the content offerings on the Yahoo Screen website.