Users Now Have More Control Over Their Facebook News Feeds

Facebook has announced a new set of features that provide users with more control over what they see in their news feeds. The new controls will include a “see first” list, comprised of the family, friends and followed pages that are important to a user and will show up at the top of his/her feed. Users can now access a single list to re-follow multiple people they’ve previously un-followed (ideal for temporarily muting spoilers of your favorite TV shows). Facebook has also added a feature to suggest pages for avid users who run out of fresh content in their feeds.

Businesses on Facebook will now have the opportunity to persuade fans to add them to their “see first” lists, a potentially important tool for brand awareness and marketing.

However, Nate Elliott, an analyst at Forrester Research, suggests that marketers should be wary, reports Bloomberg.

“In 2007, Facebook said, ‘Buy ads from us so that people will like your page, and you can deliver your message to them,’ and then they slowly whittled away that bargain,” he said. “Now in 2015, they’re going back to marketers and saying, ‘Buy ads so you can get your message to them.’ We’ve heard this promise before.” 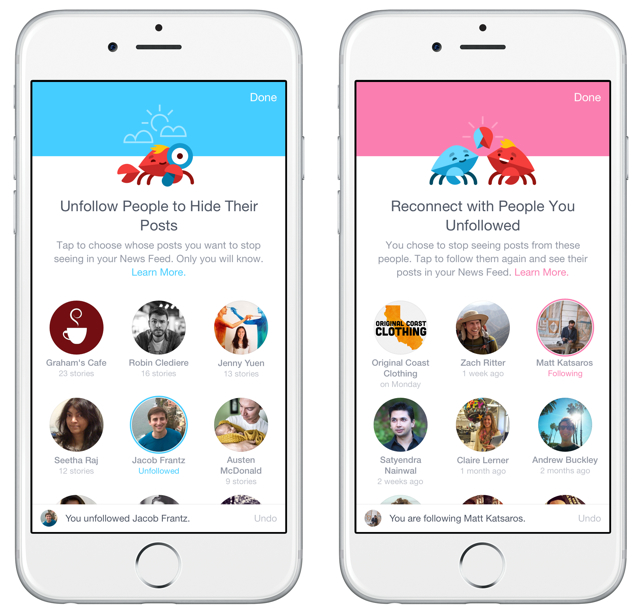 According to The New York Times, users of the iPhone and iPad versions will get full access to the new controls first, although the “see first” control is available across all platforms. The full set of controls will soon be available on Android and the Web.

The controls will be accessed by users when they click on a “more” button near the bottom of their screens, which will open a settings menu and direct them to the news feed preferences.

Facebook first introduced the updated controls in Spain for testing. “We didn’t promote it very heavily and it’s organically growing on its own,” said Adam Mosseri, Facebook product management director in charge of the news feed.

For more details on the new features, including a short video, visit the Facebook Newsroom.