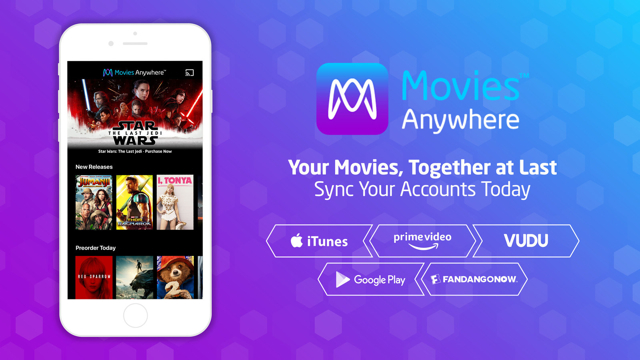 Once a FandangoNOW account is synched with the Movies Anywhere service, “users can watch their favorite redeemed and purchased digital movies from participating digital retailers on an array of platforms including Amazon Fire devices; Android devices and Android TV; Chromecast; iPhone, iPad and iPod touch; Roku devices and popular browsers.”

“We are thrilled to welcome FandangoNOW, a go-to online destination for movie fans, as our newest digital retailer,” said Movies Anywhere GM Karin Gilford. “Movies Anywhere is rapidly revolutionizing the way that consumers access and enjoy their digital movie collections. The app has been used to store over 100 million movies to date. The popularity of Movies Anywhere is largely due to the extraordinary content, including exclusives and promotions, and the support provided through our growing list of online digital retailers.”

While “Movies Anywhere is a Disney-owned entity,” reports Variety, it “operates independently with input from an advisory committee comprising members from each of the participating studios. Disney in 2014 launched a predecessor service, Disney Movies Anywhere, which served as a digital locker for Disney, Pixar, and Marvel movies. Last October, the company launched Movies Anywhere in partnership with the four other studios.”