Canadian-based Tablo has launched an app for Apple TV 4th generation devices that, with the company’s $200 Tablo DVR, will allow users to stream live TV and watch recorded programs. The Tablo DVR, seen as an alternative to TiVo, includes an over-the-air broadcast antenna, and two tuners for the $200 price. A $300 version offers four tuners; TV Guide data is an add-on at $5 a month. Tablo’s only downside may be that it requires some technical know-how to attach the user’s external drive to store the recordings.

TechCrunch notes that the app’s version 1.0 will let users watch live TV, as well as “view and schedule recordings [both one-time and series] for programs airing in the next 24 hours.” The advantage of the external drive is that the user is “in control of how much storage you have available and can expand that at will,” although it is an extra expense. 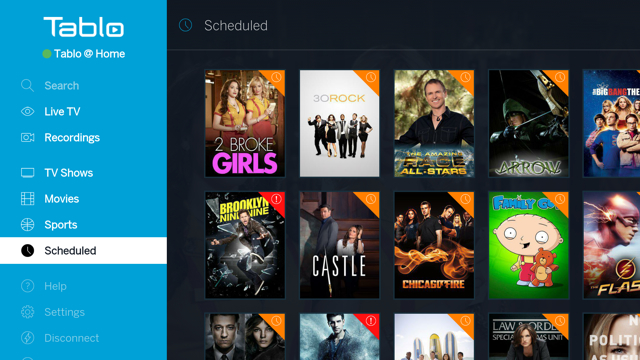 Once installed, the set-up, which features the Apple TV app’s clean user interface, is easy to use. The app also works with the Apple TV’s voice-enabled remote, meaning the user can tell Siri to skip forward or backwards, or simply “press the pause button instead, then swipe back and forth in the scrubber while viewing the fast-forward previews.”

Future plans include bringing “feature parity between the Apple TV app and those on other platforms.” Tablo is not the only solution for watching live TV on Apple TV, says TechCrunch, reporting that, “the Channels app works with the HDHomeRun TV tuner to offer similar functionality.” Dish TV also launched on Apple TV, but it is mainly for live cable TV with some on-demand content and no broadcast channels or DVR feature.