Sony demonstrated its SmartEyeglass product during APPNATION VI at CES, held at The Cosmopolitan Hotel. The augmented reality glasses use two forward-facing projectors built into see-through glasses to overlay data at a controlled stereoscopic distance in space onto the real world. Sony will sell the glasses at “a high price point” to consumers in a few select markets starting this quarter. More importantly, they hope to interest and involve developers worldwide and build out an ecosystem of apps over time.

This is an early proof-of-concept product that needs design and miniaturization fine-tuning, but it does demonstrate the potential of augmented reality.

The current version of SmartEyeglass can only display eight shades of green at 419 x 128 pixel resolution. Even at that low resolution, text displays very clearly. The rep did not speculate when they would have full color images. 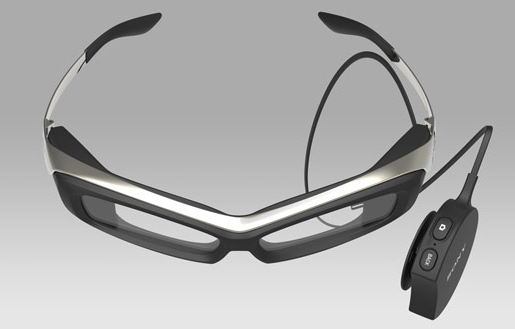 Sony demonstrated the stereo image by displaying text at 3-feet, 10-feet and infinity. These glasses are not designed to map images onto real world surfaces. Keep an eye on Magic Leap and other augmented reality technology developers for advances in that area.

The glasses have a forward-facing camera for recording images as well as use by Android apps. They demonstrated facial recognition coupled with personal data retrieval.

The glasses are tethered by a wire to a handheld controller and power supply so the glasses themselves can be a little less bulky. The controller has buttons and swipe- and tap-sensitive areas for controlling functions and menus on the glasses. It can connect to Android phones and other devices via Bluetooth and 802.11b/g wireless LAN.

Sony SmartEyeglass comes out of Sony Mobile, which absorbed Sony Eriksson. They are independent from the Sony group developing the Morpheus virtual reality head mounted display.

Sony Mobile may loan a demo unit to the ETC for upcoming events. For those interested in additional information, the SmartEyeglass contact can be reached via email.