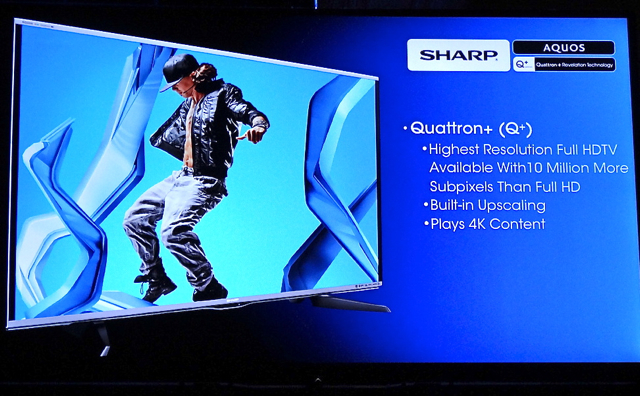 “Our new line-up of AQUOS TVs provides customers with more higher resolution choices than ever before,” said John Herrington, president, Sharp Electronics Marketing Company of America. “Not only does Sharp manufacture superior 4K and Full HD sets in a variety of large-screen sizes, our Q series and our new Q+ offerings provide viewers with even more resolution options, including picture quality never seen before from a 1080p panel.”

Toshi Osawa, chairman and CEO of Sharp Electronics, noted that Sharp’s performance is outpacing forecasts as it concentrates its business in three principle areas: consumer products, professional products, and components. He added that Sharp is a leader in the production of high quality large screen displays.

Provision for the creative professional, as well as its impact on the consumer experience, was later underscored by Herrington, who prefaced the unveiling of Sharp’s Ultra HD line-up with “The Art of Amazing,” a 4K production competition for professional filmmakers organized with Red and THX. The films will be featured in Sharp’s booth in Central Hall.

Sharp also showcased its SmartCentral smart TV platform. SmartCentral enables viewers to search cable, satellite, and streaming services through the SmartCentral interactive guide and across live TV and built-in streaming services by title, genre, time and popularity. It will even help you discover new content by providing recommendations based on your preferences. The SmartCentral mobile app, available for free for iOS and Android, enables viewers to connect smartphones and tablets to Sharp AQUOS TVs to access, control and share content. Users can discover and share videos, pictures and music stored on smart devices.