Scandy, a company with technology for printing 3D images on demand, is now debuting a beta version of a $500 tool to scan objects in 3D from Android devices. The company relies on 3D sensors from chip tech provider pmd to achieve 0.3mm feature precision, a degree of resolution ordinarily found only in much more expensive toolsets. The company is also making its Scandy Core software development kit available to developers, with the idea that they will create innovative, 3D scanning products and services. The beta program is open now.

TechCrunch quotes Scandy co-founder/CTO Cole Wiley saying, “As a maker, the potential for creating dimensionally accurate models on a sub-millimeter scale from a system that costs less than $500 is something I’ve been dreaming about for years.” 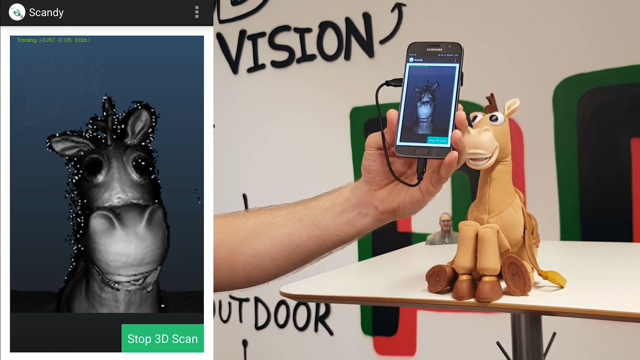 “I’m really proud we are able to provide this solution,” he added.

Scandy’s new software also offers the ability to “scan around 3 frames per second in full 3D, compiling and rendering the scans in-app.” The resulting 3D models can then “be exported for use in video games or for AR/VR applications.” The product is due to ship by the end of 2016.

The new software will face competition from several mature products. Autodesk offers its 123D Catch, which has “far lower resolution, but doesn’t rely on additional hardware to do its 3D scans.” Another competitor is Microsoft, which “has a similar product in the works in its labs.” Scandy also has competitors on the “hardware-enabled side,” including long-time player Structure, which “has been around for a while, retails at a similar price point and also has an SDK available.”

TechCrunch notes that, “it’s fantastic that the 3D scanning market is finally heating up a little bit; more competition breeds better technology — which will, in turn, make a lot of the challenges on the AR/VR content side easier.” For more information on the beta program, go to android3dscanning.com.