Consumers typically use only a small percentage of available apps each month, but their time spent with these apps is dramatically increasing. According to Nielsen, the time spent engaged with these apps has increased 63 percent over the past two years. In Q4 2012, consumers spent a little more than 23 hours per month with apps, while that figure jumped to 37 hours and 28 minutes in Q4 2014. Meanwhile, the number of apps used has only marginally increased: 23.3 apps per month in 2011, 26.5 apps in 2012 and 26.8 apps in 2013. 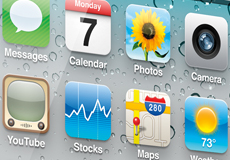 “The most recent numbers for Q4 2014 are broken down by gender: men use 27.2 apps per month compared with 26.3 apps per month for women,” reports TechCrunch. “Or, on average, consumers today use 26.7 apps per month.”

Not surprisingly, the broadly defined entertainment category drives the most usage, with a 13 percent year-over-year increase in unique audience and a 26 percent jump in time spent with apps (representing nearly three hours).

The gaming subcategory experienced the most usage, followed by music, video and movies.