After raising nearly $145,000 on Kickstarter, antenna maker Mohu plans to release its Channels TV adapter this June. The Mohu Channels device is a TV adapter that combines free over-the-air HDTV broadcasts with online video streaming services, such as Netflix, YouTube, and Hulu Plus. Mohu also hopes to include the ability to play back local files, time shifting functionality to pause and fast forward through live programming, and an Android app that can be used as a remote.

The Android-based Mohu Channels will also feature a programming guide for live TV and an integrated Web browser to access additional video sources. The interface will allow users to create a personal TV channel guide, that brings together streaming services, websites, and over-the-air broadcast channels in one channel mash-up. 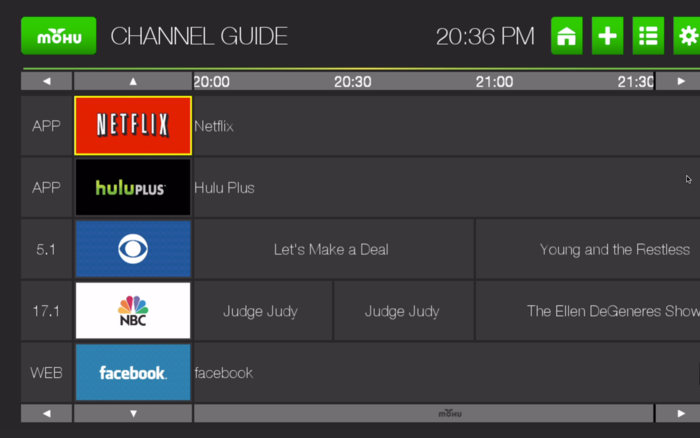 For example, by simply clicking the up or down button in their channel guide, the user could switch between their Facebook page, Netflix, or NBC.

The Mohu Channels device comes with a remote that resembles a mini keyboard. The five-and-a-half inch remote has additional buttons, though, to control the TV’s functionality, such as volume and power. Randy Drawas, the chief marketing officer of Mohu, told GigaOM that the finalized Mohu Channels product will be released in June.

Mohu Channels is competing with several other streaming players. Roku, Chromecast, and Amazon’s new Fire TV already give users access to streaming services such as Netflix and Hulu Plus. Simple.tv is another Android-based device that gives users a way to stream live and recorded over-the-air TV content. Tablo is a similar DVR device that offers cord cutters streaming of free HDTV to iPads and other mobile devices.