NBC Sports Digital launched a redesigned site that emphasizes live sports broadcasting, including “Sunday Night Football” games. The site, which is live this week, highlights a total of 2,700 streamed-live events this year and 4,000 next year with the Summer Olympic Games in Rio. This year’s live streaming events include NFL games, the Stanley Cup, NASCAR, English Premiere League soccer and Golf Channel content. Although advertising revenue from the website is small relative to linear TV, executives are excited about its prospects.

The Hollywood Reporter quotes NBC Groups SVP of digital Rick Cordella that mobile will only grow in importance. “We make our money from live steaming video, so it made a ton of sense to feature that,” he said. “There’s an organic rising of the tide as people are more comfortable with video [on smaller screens]. That’s where ad dollars are flowing.” 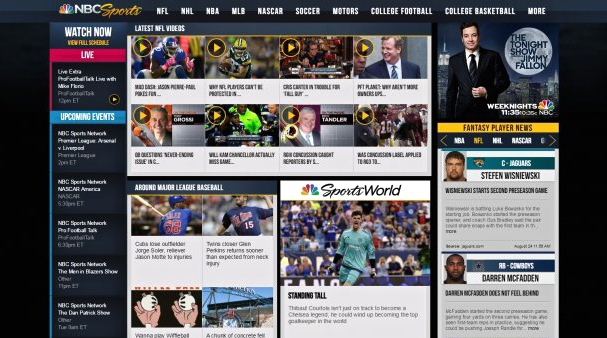 According to comScore, NBC Sports Digital (via Yahoo Sports-NBC Sports Network), with its 52.8 million unique users in July, as one of the top sports destinations, just behind ESPN.com’s 71.6 unique visitors.

During the 2014 Winter Games in Sochi, the Yahoo Sports-NBC Sports Network ranked first among sports sites, with 63.6 million unique users, adds comScore. The network, which has the Olympics through 2032, will stream 4,000 events at next year’s Summer Olympics, a key part of its live streaming strategy.

The redesigned site features a dedicated “Watch Now” feature on the screen’s left side, that acts as a streamlined shortcut to all video on the site, including upcoming events (72 hours in advance) and short-form content.

THR notes that, although digital inventory lags behind linear TV advertising dollars, during the London Olympics, “it accounted for $60 million of the $1 billion in ad dollars spent.” NBC sports executives believe the Rio Games will see a 75 percent increase in ad inventory.