A new live mobile game called “HQ” is giving away real money and adding something new to the genre. The iOS game is the brainchild of Vine creators Rus Yusupov and Colin Kroll, and combines elements of current popular game shows, including “Jeopardy!” and “Who Wants to Be a Millionaire?” The game goes live daily at 3:00 pm and 9:00 pm ET, and lasts for 13 minutes as one of two hosts (either New York comedian Scott Rogowsky or British on-air personality Sharon Carpenter) shoots off 12 multiple choice questions that range in difficulty and topic.

The Verge reports that that the player is knocked out of the game for one wrong answer, but the handful of seven to 15 people who usually get all the answers right share a prize pot of $250. “In the era of Silicon Valley corporate dominance, tired pivots to video, and the unending hunger for original content, nothing feels original, genuine, or enticing … yet playing just one round of ‘HQ’ is enough to make you wonder why it hasn’t been done before.” 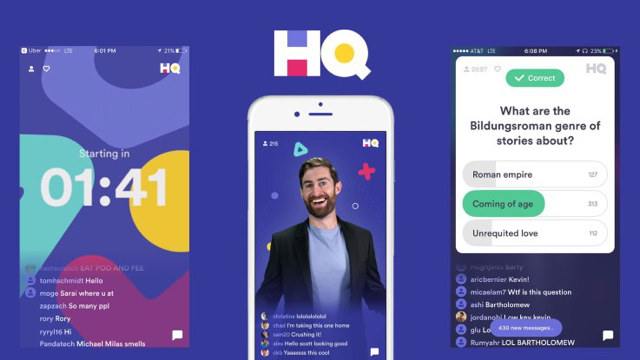 The format of multiple choice questions gives “even the least trivia-savvy people a jolt of confidence,” but the speed of the game — 10 seconds from the start of the question — “makes it very difficult to Google your way to the right choice.”

“It’s well thought out and addictive, and you’ll immediately feel the urge to tell all your friends about it,” suggests The Verge. “The app is simultaneously a TV show, a mobile game, and an advertising and product giveaway platform,” with “the ephemerality of live television, the reach of an iOS app, and the universal draw of a game show trivia contest.”

The app’s “freshness” may be a “momentary blip on the mobile radar,” because mobile games often flame out quickly. But, “something tells me ‘HQ’ is only going to get bigger and more dynamic before any of that happens,” and if people do drop out, “it means more money for the rest of us.”