LinkedIn Rolls Out Feature That Allows Users to Post Videos

Following a period of testing, LinkedIn is launching a “video” button on its iOS and Android apps, debuting it globally over several weeks. The button will allow users to record a new video or upload an existing one. According to the company, which is a subsidiary of Microsoft, it will allow users to share aspects of their professional lives in a new way, and to a professional audience. The addition of video on LinkedIn takes place as companies such as Apple, Facebook and YouTube are investing in original video content. 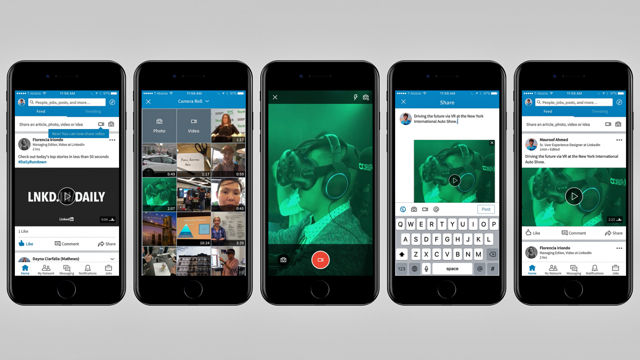 LinkedIn group product manager Pete Davies notes that, when people try to describe their jobs, “text cannot capture the work,” and that video of those jobs makes for “stunning visuals.” He also says that LinkedIn has “nothing immediate” to announce regarding following the suit of Facebook and others.

LinkedIn senior product manager Peter Roybal says that the main reason for users to post video on his company’s site is to “share it with your professional audience,” with content “that is most relevant to the people they’re connected to.” He adds that, when some users figured out he was in charge of the nascent video feature, “they started tagging him in their posts, begging for access.”

On the LinkedIn blog, the company tells users that, after posting a video, they will be able to click on audience insights, located on their profiles’ dashboards, to see “the top companies, titles and locations of your viewers, as well as how many views, likes, and comments your videos are receiving.”