LG debuted plastic OLED tech with its recently launched G Watch R smartwatch, and introduced a version on its G Flex curved smartphone. The company has revealed future plans for P-OLED displays, likely to involve screens for smartphones, tablets, computers and TVs. The tech enables lighter, thinner, more durable screens, which opens a range of possibilities. We should expect to see P-OLED used in foldable computers, tablets with rollable displays, small screens for wearables and bendable screens for automobiles.

“While glass displays are prone to breakage, plastic OLED, which is film based, is flexible to be curved to a certain angle, and it does not break easily,” explains the press release. “As plastic OLED can be applied to curved displays that are bent to a certain curvature, it can be used in various ways, including electronic goods, such as mobile phones, monitors, and TVs, as well as cars, wearable devices, and items for interior design.” 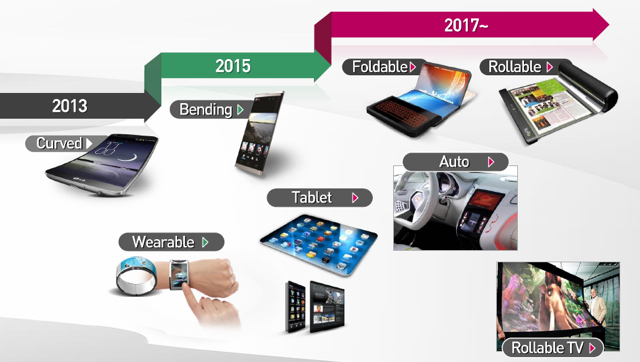 “There are several reasons why the continued development of P-OLED displays is a good thing,” suggests Digital Trends. “The screens are thinner and lighter than OLED screens built using glass, are far less complex in design, and are more eco-friendly. The plastic cover is also considerably tougher than glass, and won’t shatter in the event of a sharp impact.”

Bendable smartphones with P-OLED displays may be on the agenda for next year. P-OLED screens will likely follow on tablets, possibly with a much smaller bezel — another advantage of the technology.

“The roadmap shows P-OLED tablets arriving in late 2015, after which there will be a lull until 2017, when foldable computers, tablets with rollable P-OLED displays, and huge rollable televisions are on the agenda,” notes Digital Trends. “LG also indicates it will produce bendable P-OLED screens for use in cars.”