South Korean researchers at public university KAIST have developed an alternative to Google Glass called the K-Glass. Although similar to Google’s electronic eyewear, KAIST’s wearable alternative is equipped with a special AR chip that enables the device to recognize objects without relying on barcodes or other markers. While currently bulkier than Glass, KAIST explains that its processor “duplicates the ability of the human brain to process visual data.”

“We have yet to decide on a specific target application, which will be needed in commercializing the product,” said KAIST professor Yoo Hoi-jun. 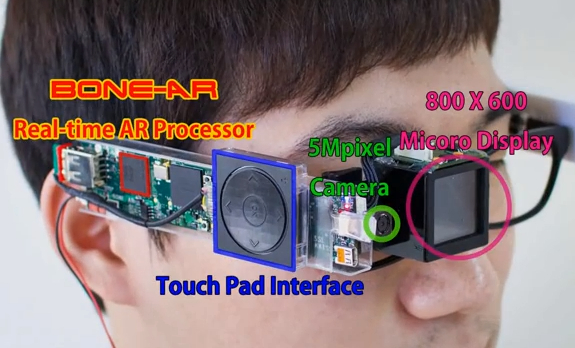 However, the description accompanying a 2-minute video demo available on YouTube details one possibility. It describes K-Glass as “a wearable, hands-free HMD that enables users to find restaurants while checking out their menus. If the user of K-Glass walks up to a restaurant and looks at the name of the restaurant, today’s menu and a 3D image of food pop up. The Glass can even show the number of tables available inside the restaurant.”

“K-Glass, ultra low-powered with high performance, makes this possible because of its built-in augmented reality (AR) processor,” notes the description.

“The AR processor has a data processing network similar to that of a human brain’s central nervous system,” explains TG Daily. “When the human brain perceives visual data, different sets of neurons, all connected, work concurrently on each fragment of a decision-making process; one group’s work is relayed to other group of neurons for the next round of the process, which continues until a set of decider neurons determines the character of the data.”

“The South Korean government, which has been pushing for a more ‘creative’ economy, recently named wearables as a new growth engine, saying that the segment will have a significant impact on the country’s future economic status,” reports The Wall Street Journal. “This week, the Ministry of Trade, Industry & Energy initiated what it calls a ‘wearable smart device’ forum consisting of officials from both the public and the private sectors including executives from Samsung Electronics and LG Electronics.”

Yoo will serve as a committee member of the forum, which is expected to meet monthly.

“Wearable devices today come with limited functions like checking a user’s health condition or linking information through smartphones, checking emails and schedules,” explained the ministry. “But in the future, the application is expected to expand to cover products used in everyday life including outfits and tools used under high-risk situations like fire-fighting and national defense.”

“HMDs will become the next mobile device, eventually taking over smartphones,” adds Yoo. “Their markets have been growing fast, and it’s really a matter of time before mobile users will eventually embrace an optical see-through HMD as part of their daily use. Through augmented reality, we will have richer, deeper, and more powerful reality in all aspects of our life from education, business, and entertainment to art and culture.”

KAIST, formerly the Korea Advanced Institute of Science and Technology, is a public research university in South Korea established in 1971.