Viewers have the ability to interact with characters in Infiniti’s Deja View video, created as part of an online campaign to promote the 2014 Infiniti Q50 sport sedan. The responsive video, produced by New York agency Campfire, uses voice recognition technology that allows viewers to interact with the video’s characters through toll-free phone calls. The story’s plot then responds dynamically based on the responses of each online viewer.

“To set up the Infiniti Deja View experience, which typically runs from 15 to 20 minutes, an online viewer is prompted on screen to call a toll-free number from a cellphone or personal landline and enter a five-digit code,” reports The New York Times. “That sets the plot into motion, revealing a pair of stylish, youngish characters — a scruffy man, played by Andrew Pastides, and a tailored woman, played by Charlotte Sullivan — driving together in a Q50 hybrid.” 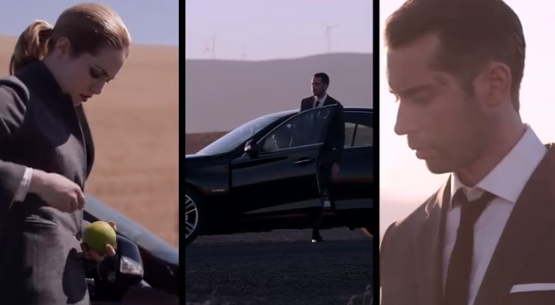 “Although they seemingly have amnesia, viewers get a hint as to who they are when snippets of the Q50 commercial turn up. Perhaps they are lost in an episode of ‘The Twilight Zone,’ or zoned out in an episode of ‘Lost.’ In any event, at various points, the characters call the viewer on the previously entered phone number.”

“What you say and how you say it determines the story,” explains the female voice over on the video’s trailer, “because only you can answer the call.”

The agency “shot thousands of different alternatives” for the video, explains Jeremiah Rosen, president of Campfire, along with “alternate takes in a recording session, audio only, in a studio.”

“The campaign, with a budget estimated at $2 million, is another example of an increasingly popular trend on Madison Avenue called content marketing, also known as branded content or branded entertainment,” explains NYT. “The goal is to transform prosaic product advertising, which consumers can now easily avoid or ignore, into compelling content they deem informative or entertaining.”

The Deja View video complements a commercial for the Q50 called “Factory of Life” by TBWA/Chiat/Day Los Angeles. Infiniti also worked with Motor Trend magazine on a video called “The Deal,” another content marketing campaign.