As it does every year, the IEEE (Institute of Electrical and Electronics Engineers) presented a rundown of emerging technologies it believes will go mainstream in three to five years. “These technologies are still incubated out of the mainstream,” said IP Action Partners president Stuart Lipoff, who moderated the CES event. He identified seven “overarching drivers of emerging technologies,” beginning with managing complexity of feature-rich hardware, QoS-aware broadband connectivity and cheap, abundant storage.

Other drivers are hybrid local and cloud processing architectures; managing privacy, security and trust; everything is smart and networked and the integration of AI, VR and AR into “stuff.” 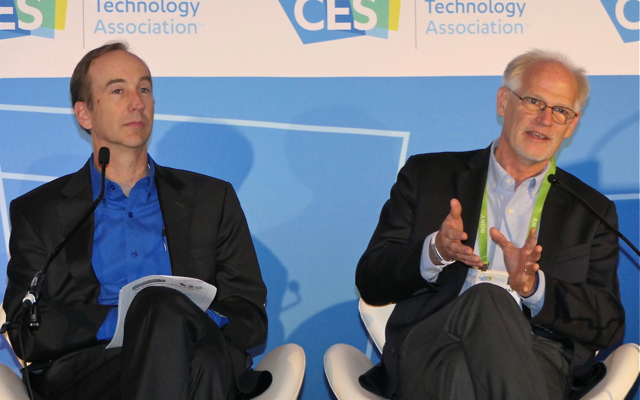 The first presenter, Tom Coughlin (above right), president of Coughlin Associates, identified trends in augmented and virtual reality as well as artificial intelligence/expert systems. With regard to the former, he noted growth in 360-degree content and viewing equipment, the appearance of AR in consumer products, applications developing in medicine, training and repairs (the sector where most of the immediate applications are).

He also noted that combining AR/VR with haptics will give even more immersive experiences, and mentioned he saw Internet-connected smelling devices. “Maybe smell-a-vision is coming back,” he joked. Looking into the future, he surmised the “real interesting possibilities” of AR glasses replacing smartphones.

With regard to AI and expert systems, he noted data fusion enabling driving assistance and autonomous driving as well as “new types of consumer products and marketing, smarter robots and content discovery, and improved security.”

CTA senior vice president Brian Markwalter (above left) covered broadcast and online audio and video. “TV reinvents itself continuously,” he said, mentioning the significant milestone of the unveiling of the ATSC 3.0 standards. “The U.S. and Korea share the standard,” he said. “There’s an online component so it’s a radical improvement.”

Advances in displays include the introduction of microLEDs for large format and business applications, as well as large OLED displays and large flexible screens. For online audio/video, he said, everyone is trying to go beyond proprietary technology to get AV on the browser without today’s required plug-ins.

Saraju Mohanty at the University of North Texas described advances in smart city technologies and, with it, smart healthcare, real-time monitoring, automated nutrition monitoring and meal prediction system; IoT-based automated accurate physiological system; and IoT-based seizure detection and drug delivery. He also pointed out that nanoelectronics will play a role in advancing these sectors.

Stefan Mozar at Dynexsys Pty in Australia touched on the huge growth in IoT and portable power. “Cars now have as many lines of connectivity as a Boeing 747,” he said. “Automotive chief technology officers are no longer mechanical engineers but electronics engineers.”

He reported that wireless charging is convenient, but still only 40 percent efficient. “USB power is really the thing to look at,” he said. “It’s found around the world, although it has a few hiccups it needs to resolve. Nanogenerators are very promising. We won’t just rely on batteries in the future. We’ll see new sources of energy.”

Ball State University professor Vinayak Tanksale covered blockchain, which he pointed out started as digital cash protocols many years ago. “We’re moving away from the idea that blockchain is only good for cryptocurrency,” he said. “We see applications in healthcare as well as digital identities, and supply chain management.”