Huawei’s new P20 Pro, which features an AI-powered Leica triple camera system, has been ranked as one of 2018’s best Android phones. The new smartphone is also stylish, with the option of a Twilight glossy blue/purple finish. The 6.1-inch OLED screen offers an aspect ratio of 18.7:9 (it’s a little more than twice as tall as it is wide) and 2240×1080 resolution. But nobody in the U.S. will be able to buy the P20 Pro anytime soon, since AT&T pulled out of the partnership due to FCC concerns over potential spyware.

Despite the fact that the phone isn’t available to U.S. consumers, Engadget reviewed the Huawei P20 Pro, raving about its “insane Leica triple-camera system” as one of its top features. The system includes a 40-megapixel RGB camera, a 20-megapixel monochrome camera and an 8-megapixel telephoto camera, combined with an assistant dubbed Master AI. 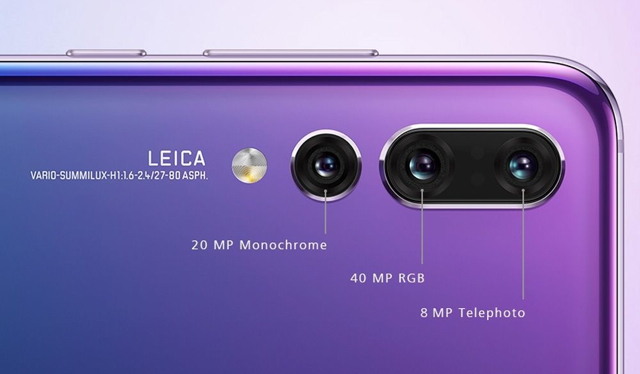 Huawei “trained the Pro to identify different scenarios and adjust the camera’s settings accordingly,” in a kind of “artificially intelligent Auto mode.” A Night mode takes multiple exposures of a scene over four seconds, melding “the best bits of each shot into a single photo.”

“I honestly cannot remember the last time I had this much fun shooting photos with a smartphone,” enthused the reviewer.

The phone’s inner workings feature the same Kirin 970 chipset as last year’s Mate 10 Pro, and the same 6GB of RAM and 128GB of storage. “Just don’t expect flawless performance when you break out the heavy-duty games like ‘PUBG,’ which was occasionally choppy, but not to the point of frustration,” warns the reviewer, who is also skeptical about Huawei’s claim that the Kirin 970’s neural processing unit is optimizing the P20 Pro’s performance.

The 4,000mAh battery lasts between two and two-and-a half days of “pretty consistent use,” although “you’ll notice a hit in battery life if you use the camera a lot.” “In building the P20 Pro, Huawei … was being audacious,” and built a “flagship phone that’s good enough to compete with the iPhones and Galaxys of the world.”

Every Other Shot compared the Huawei P20 Pro’s triple camera system to the Canon 5DSR with a Canon 24mm f/2.8 IS prime lens on the 5DSR, and both devices set to everything in Auto mode. The reviewer noted that the P20 Pro “has some vignetting issues to deal with, but, otherwise not bad,” and that it “does a quite dramatic JPEG recovery in-camera, fixing the vignetting and boosting the colors and levels to create a rather nice photo.” Crops and low light shots show an impressive amount of detail, despite artifacting in low light.

“I certainly won’t be giving up my 5DSR in a hurry, but the quality of the photos from the P20 Pro is astounding,” said the reviewer. “This is a clear indication of the importance of computational photography and how this will become the leading factor in the success of mirrorless cameras as these develop.”