For NBA Digital, the Television Set is Now the Second Screen

On the heels of NBA Digital’s announcement that it would stream one live game optimized for VR per week, on Tuesday, the NBA will introduce another feature: “Mobile View,” which offers a tighter zoom on the action for better viewing on phones and tablets. Games will be shot with different cameras to enable Mobile View, which will be available to subscribers of NBA League Pass, Team Pass, and even those who stream single games. Mobile View will be in preview for a week during League Pass’ trial period.

Wired reports that “NBA Digital says more than 70 percent of its streamed games are accessed via mobile devices.” NBA League Pass is also now expanding into China with “hundreds of millions of potential new streamers,” many of whom will use mobile devices. 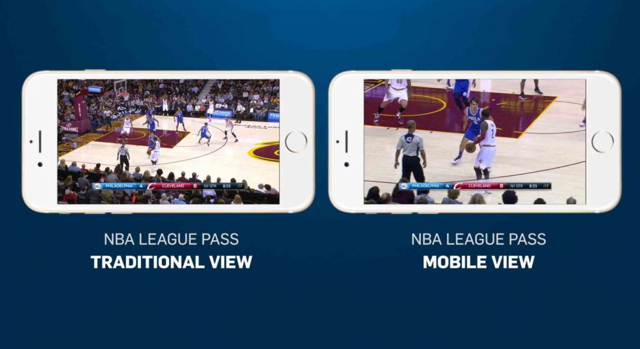 Mobile View provides the kind of close-up experience that works much better on a smaller screen. For that reason, “it makes sense for NBA Digital to invest in optimizing live coverage for smaller devices rather than just shoehorn its TV broadcast onto all screen sizes.”

TechCrunch describes that the current NBA League pass — which costs “$199.99 for every team or $119.99 for one team” — is so completely maximized for a bigger screen that “it makes mobile viewing a last resort.” With Mobile View, fans now have a third option — the first two being “home” and “away” broadcasts — for each game. Mobile View lets the viewer “easily see the name on the back of each player’s jersey,” among other details normally only viewable on a big screen.

To make Mobile View a universal feature, “all 29 arenas will get a new dedicated camera, cameraman, and producer that are all on-site for each game.” The Mobile View feeds will also mainly, but not entirely, feature video from the close-up camera; the producer will be able to “bring in shots and angles from other feeds to make sure Mobile View viewers aren’t missing out on anything.” The graphics package will remain the same but may change in the future, and audio will currently emanate from the “home” package.

Prior to launching Mobile View, the league posted two versions of game highlights on their social media pages, and found that “viewers on mobile interacted 2.5x more with the Mobile View content compared to the standard version.” The NBA’s move also “puts the pressure on other leagues’ mobile viewing product like NFL Sunday Ticket,” which thus far has not focused on mobile streams.