Facebook’s iPad app will no longer be merely a larger version of the iPhone app. The social network has launched a new sidebar in its iPad app for U.S. users. This new feature makes it easier for people to discover games, videos, and news articles based on their interests and their friends’ activity. The update includes a new “My Games” section that has notifications from the games that users already play and “Popular Games,” which suggests new iPad games that users may be interested in.

The sidebar update was developed to optimize how people use an iPad differently from an iPhone. According to the Facebook blog post, “This update will surface content on the right-hand side of the iPad that’s relevant to how people use tablets today, which is primarily to read news, watch videos and play games.” 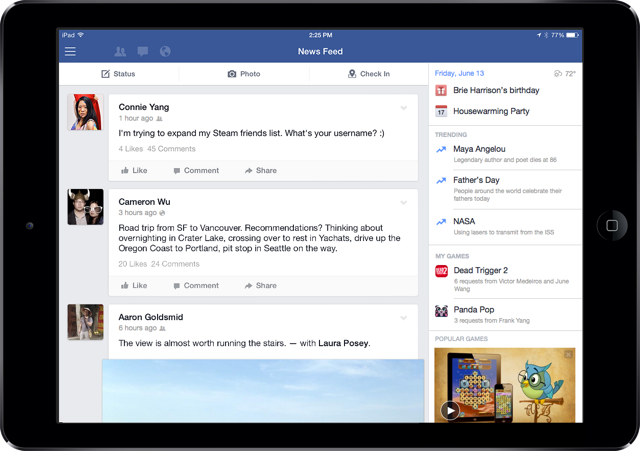 Gaming is a new area of interest for Facebook iPad app developers. “Over 70 percent of people who use Facebook for iPad played a Facebook connected game in the past 90 days,” reports TechCrunch.

With the update, Facebook can help users find new games, encourage game developers to add Facebook integration, and eventually, use the sidebar for game ad space. Games with Facebook integration, such as a Facebook login option, are eligible for free promotion in the new sidebar. Developers simply have to register and upload a trailer video for their game.

Trending Videos is another entertainment addition to the sidebar. Facebook will display a personalized selection of videos that are popular with a user’s demographic. Many users prefer to watch videos on the iPad because of its bigger screen, and because it is usually connected to Wi-Fi.

Facebook could possible monetize the Trending Videos section by showing pre-roll or overlaid ads before redirecting users to a video on YouTube or Vimeo.