Facebook launched a new section of its website devoted to live updates from big sports events. The Facebook Sports Stadium is a combination of live game data from Sportradar, play-by-play updates, and commentary from both verified experts and regular Facebook friends. This new sports hub is designed for sports fans to use while they are watching games on television. Currently, many of the social conversations surrounding live TV events are taking place on Twitter.

If Facebook Sports Stadium is a success, it could be a win-win for Facebook, the sports teams, and even the sports broadcasters. Steve Kafka, product manager for Facebook Stadium, told Re/code the conversation on the new sports hub could drive more eyeballs to the content that teams and broadcasters are already sharing. For Facebook, more live TV talk could help the company attract advertisers. 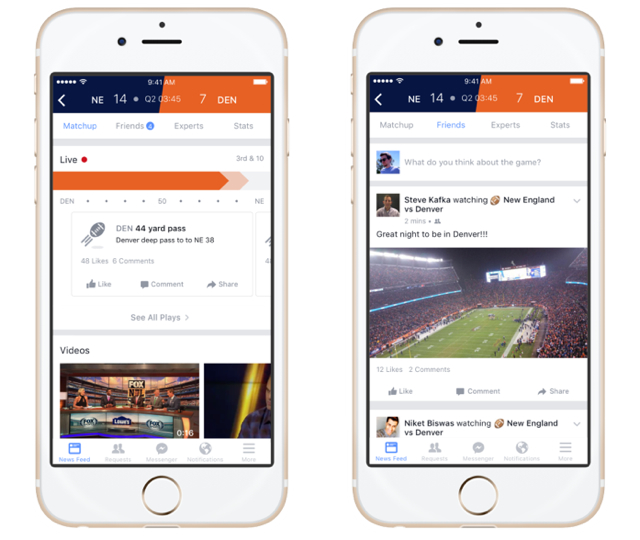 Facebook Sports Stadium will have to compete with other popular social networks that have a strong association with live events. The feed in Facebook’s sports hub will be in reverse chronological order, just like Twitter. Facebook will also try to attract the major influencers that are mainly posting on Twitter about sporting events. It will also integrate videos, so that it can compete with Snapchat’s Live Stories.

Facebook says it already has a solid foundation for conversation about live TV. Some 350 million people talked about the 2014 World Cup on Facebook. The Super Bowl draws comments from about 65 million people. To take advantage of the huge football audience, Facebook is launching the new section in the app for iPhone users in time for this weekend’s NFL playoff games.

Facebook Sports Stadium will also be available on desktop in time for the Super Bowl.