Facebook rolled out its initial support for 360-degree Live streams, allowing publishers to stream immersive videos directly to News Feed. The first publisher to do so is National Geographic’s Facebook Page, which will show scientists emerging from 80 days of isolation in pods at Utah’s Mars Desert Research Station and feature footage of the ersatz Mars landscape and interviews with the researchers. Later in the month, Facebook Live 360 broadcasts will be an option in Facebook Live’s API.

TechCrunch reports that, “next year, Facebook plans to roll out the immersive, real-time video streaming capability to all Pages and users,” but, for now at least, Facebook Live 360 videos won’t be viewable with VR headsets. Nor is there support for 4K-resolution video or spatial audio but, says Facebook, “they’re things we’re thinking about.” 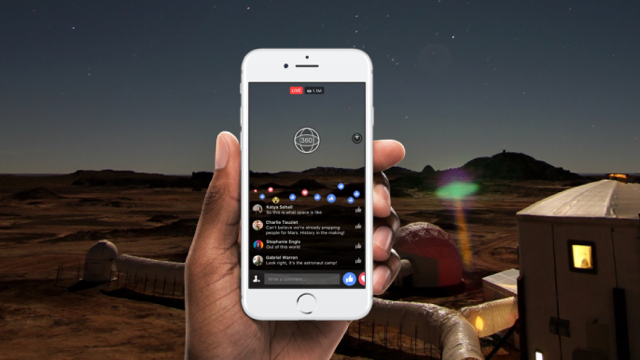 With regard to 360-degree video and livestreaming, YouTube is the current leader, since anyone can live-stream 360-degree videos, “but only if they have special encoder software set up on their computer like OBS streaming from a Ricoh Theta S.” Facebook’s approach, says TechCrunch, is “more user-friendly … aiming to allow normal profiles to be able to easily broadcast from a 360 mobile device without desktop software.”

Recode points out that, “Live video has been Facebook’s biggest product and marketing push of the year,” with the company “paying brands and celebrities … to create live videos,” and giving live videos higher priority in News Feed as well as launching “a massive marketing campaign to promote the entire effort, which isn’t a common strategy for the social giant.”

Platforms that haven’t taken the 360-degree video plunge include Twitter, which “doesn’t offer any 360 support from Periscope,” and Snapchat, which also “notably lacks any 360 features.” Video creators are also “still experimenting” with “what will be exciting in 360 live.” Facebook also introduced Instagram Live to “everyone in the U.S.,” with its disappearing videos differentiating it from Facebook Live clips.