Turbo Tax ran a 30-second spot on ESPN’s “SportsCenter” this past weekend, marking the first “programmatic” ad for the sports network. Turbo Tax purchased the ad time through a Web-based auction, a model that is part of a new initiative recently announced by ESPN. The ad ran during the Saturday 1:00 am broadcast from a giant video screen on the show’s set, and was introduced by an anchor who said, “SportsCenter will be right back in 30-seconds.” This approach could lead to a major shift in the current advertising model.

While ESPN’s cameras panned to the video screen, the ad never actually filled the television screen, and a countdown clock ran the entire duration, letting viewers know when the show would return. Additionally, ESPN’s Bottom Line — its lower-third graphic ticker — remained on screen. 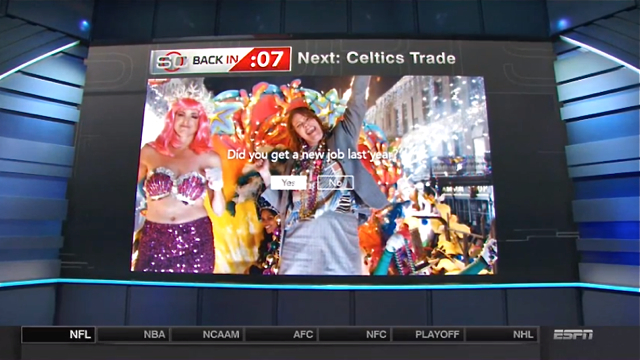 “Although it ran rather late at night, this Turbo Tax ad is potentially groundbreaking for the TV business,” reports The Wall Street Journal. “Networks have generally been reluctant to adopt the Web-based auctions that are common in online advertising, fearful that it could lead to low prices for what should be premium inventory. There are signs programmatic approaches are slowly starting to gain traction, however, and ESPN wants to get out in front of the wave.”

Turbo Tax reportedly outbid other advertisers for the spot, although the amount paid has not yet been revealed.

Visit WSJ to check out the ad.