While total viewer numbers will not be available from Nielsen until later today, last night’s telecast of the 86th Academy Awards from the Dolby Theatre in Hollywood scored impressive numbers in the major markets, up 7 percent from last year. In addition, host Ellen DeGeneres set a new social media record by taking a celebrity-filled selfie during the broadcast that has been retweeted more times than any photo in Twitter history, besting President Obama’s tweet after he won the 2012 presidential election.

“A telecast marked by nods to technology — DeGeneres, hosting for the first time in seven years, took a smartphone picture of herself watching the audience and later snapped one with big stars — scored a 27.9 household rating/41 share in the largest TV markets,” reports the Los Angeles Times. 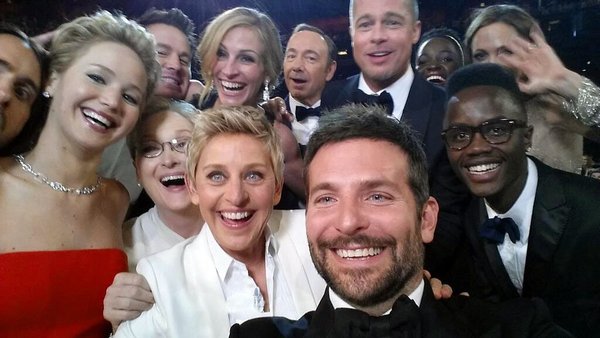 “She went into the audience and gathered a number of stars — including Meryl Streep, Kevin Spacey and Bradley Cooper, who shot the image — and encouraged people to send it around the world,” adds CNN. “She had a pretty good head start, given that she has more than 25 million followers on Twitter.”

With more than 2 million retweets and still climbing, DeGeneres broke the previous record in a little more than half an hour, even leading to a “brief service issue” with Twitter.

“Ellen got confirmation from Twitter during the telecast and took the stage to share the news with the audience,” reports The Verge. “We just broke Twitter,” said DeGeneres. “We’re all winners.”

As we reported last week, ABC was live-streaming the telecast online to subscribers of eight pay TV operators, in addition to providing live backstage content for free via its Watch ABC service. Unexpected demand for the live stream resulted in the video going down.

“The live video through the Watch ABC app was ‘down nationwide due to a traffic overload/greater than expected,’ a network rep said in an email,” reports Variety. “As of 10:45 p.m. Eastern, the feeds were back up, according to the rep.”

Related Stories:
Live Polling on Twitter to Have an Oscar Moment, The Wall Street Journal, 2/28/14
‘Wall-E’ Director Celebrates the Power of Storytelling in Google’s Oscars Ad, The Verge, 3/3/14