An all-star panel of futurists and inventors featuring John Underkoffler, CEO & chief scientist, Oblong Industries; Philip Rosedale, CEO of High Fidelity and founder of virtual world “Second Life;” Berkeley academic Jack McCauley, founder & president of McCauley Labs and a co-founder and chief engineer of Oculus; and Richard Marks, director of PlayStation Magic Lab looked above and beyond the introduction of VR to articulate an array of visions and technical challenges yet to be mastered. The panel took place at Digital Hollywood and was moderated by ETC project manager Philip Lelyveld.

If there was a common theme to emerge among the participants, it was articulated by Richard Marks who summed it up in one word, “value.” If you are going to have the friction of wearing a headset, then the experience must be worth it, he elaborated.

The ease of something simple, such as Google Cardboard, permits lower level fidelity because the threshold is low. But the high value opportunity in VR he said, is with the highest possible fidelity, provided the cost and comfort are reasonable. 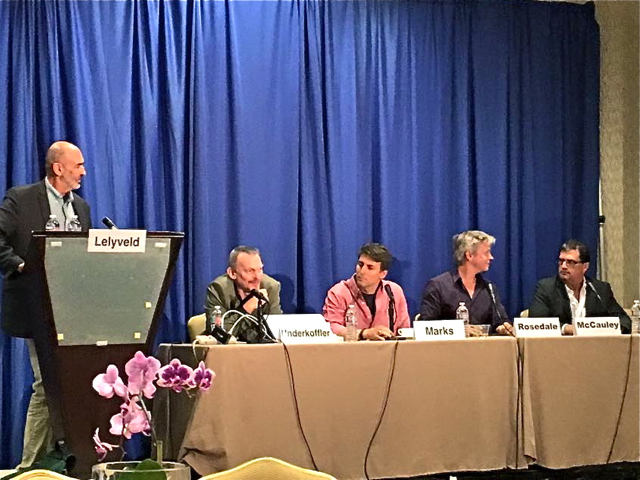 Rosedale, whose “Second Life” is widely regarded as a prototype for virtual worlds and social interaction, believes “the idea here is that we are going beyond the mouse.” He suggested that the revolution in VR will be “the absolute requirement of both the head and the hands.”

Where the mouse has just two dimensions of movement, the VR interface has the potential for 18 dimensions of free movement — six each for your head and hands.

“The real experiences that are genuinely going to be disruptive are going to be the ones where we have agency — where we can reach into the virtual world and do things,” said Rosedale.

McCauley wants to “take VR and put it into the hands of everyone by making it less expensive.” He envisions doing so by shifting the computational load off the host PC and potentially onto the headmount. He also cited eye-tracking as vital because eyes only resolve a small area of the field of view. By tracking the eyes, the system could render in high resolution only the pixels where the viewer is looking.

“Whether wearing the ‘bucket’ on your head or in a room surrounded by pixels, VR without an input, a UI, is just 360 Cinema,” Underkoffler observed.

Furthermore, the language of VR has yet to be defined. Unlike the pioneers of moviemaking, who transposed theater onto film, there is no single framework for VR. He suggested the evolution of a conformed UI — a lingua franca that would be relevant across VR, AR, cinema, the regular screens that we are used to, and mobile devices… we just need a little to get started.”

The panel concluded with a five-year projection on VR and AR.

McCauley recognized advances in mobile devices as a catalyst to the present state of VR. Resolution will improve to the point where you can no longer see pixels, likely with OLED technologies, Magic Leap’s development and the promise of untethered VR and AR.

Rosedale suggested that AR will not be viable in five years because registration — the accurate alignment of virtual objects in the real world — will still be a challenge. Overall, he compared this era to the early days of the Internet. Even people who completely embraced the Internet could not imagine its full potential.

Marks built on the theme of the not quite known. “In engineering we know the trajectory,” he said,” but not so much on the interaction.”

Underkoffler noted that, today, computation ends at the physical end of your device. Five years from now, there is no reason for that to be so. “Instead, the continuity of our world is a real possibility five years from now.”

Video of the panel discussion is now available online.