Internet TV has become increasingly mainstream, fulfilling the promise of video anytime, anywhere. A Digital Hollywood panel, moderated by Siemens executive Steve Wong, took a look at video across platforms to determine where the players currently stand in the evolution. Quoting a Parks Associates study, Wong revealed that North America leads the globe with OTT, whose revenue is largely based on subscriptions rather than transactions. Internet advertising is also due to overtake TV advertising by 2017, said the study.

Who will be the winner in 2016, asked Wong: traditional TV, mobile video, DVR or Internet video? W12 Studios founder/partner Fabian Birgfeld voted for traditional TV, which, although it is being undermined, “is still one of the best experiences out there.” Even short-form content creators, he pointed out, aim “for a place in the traditional ecosystem.” 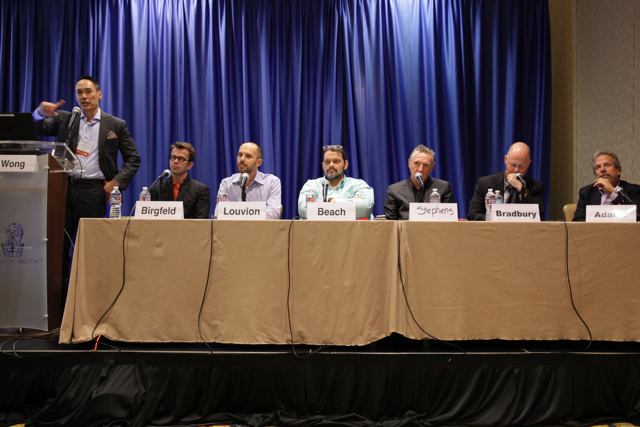 Zazoom Media Group executive Steve Bradbury dubbed them all “somewhat winners and losers.” “Traditional TV’s demise is exaggerated,” he said. “With mobile TV, monetization is still the challenge. DVR has been going on for 30 years, and Internet video, if you want to separate from mobile, is something we’re all doing.” Binge watching changes the equation, he noted, making time-shifted video the winner. “It depends on the context.”

The experts considered whether one ecosystem or multiple app systems is better. “Traditional TV is tied to someone who owns spectrum,” said Sony Pictures CTO Spencer Stephens. “But TV-over-spectrum may have a limited life. We still have to build a relationship with the consumer.” He added that if an app is lost among thousands of others, it’s not much different from a channel lost among 500 others. “Gaining market share has never been easy,” he added.

M-GO executive Christophe Louvion noted that “the cognitive overhead to switch from one app to the other is very cumbersome,” and Birgfeld agreed that, “in the digital space, the big challenge is fragmentation.” “If you can reduce the burden of choice, you do everyone a favor,” he added.

Bradbury pointed out the “interesting battle” going on for who owns the relationship with the viewer. “Today, the distributor, whether it’s cable or satellite, wants it,” he said. “So do the content owner, the producer, the talent. There’ll be lots of jockeying back and forth, and control will go more and more to the consumer, and that will define winners and losers.”

Microsoft Xbox Live developer Andy Beach noted, “we’re in this painful, awkward period of transition where everyone has their own take on it.” “We’ll see where the evolution gets us,” he said. “Discoverability is what it’s about. I’m figuring out how to deliver the content to everyone.”

Wong pointed out that technology allows writers and actors to reach out directly to audiences. “Is it a B2B or a B2C model?” he asked. Bradbury answered that it’s “not a zero sum game.” “It’s a battle for attention and who will own the relationship,” he said. “It’s eyeballs and revenue. At the end of the day, if the revenue isn’t there, the rest is academic.”