Within, a Los Angeles-based cinematic virtual reality startup, just unveiled a website that allows users to have a VR experience on any device, from a desktop PC or mobile phone to a dedicated VR headset. The company relies on WebVR technology that avoids the need to download additional software to be able to play VR experiences in supported browsers. Users without a VR headset can navigate the content via the web browser, and those with VR headsets use hand controllers and tracking tools. 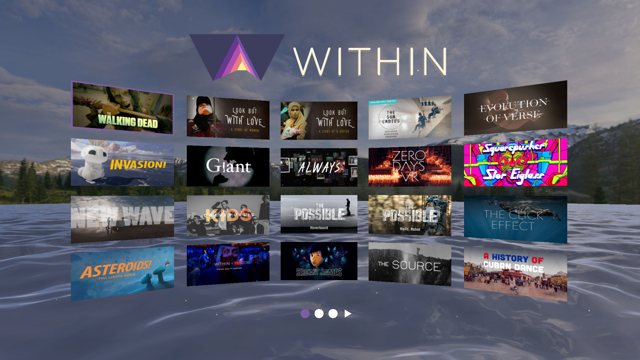 “We aim to make it as easy as possible for fans to discover and share truly great VR experiences,” said Within’s content launch manager Jon Rittenberg. Within partnered with Firefox browser’s Mozilla, “which has been a key player in the development of the WebVR standard.” Mozilla has also “been busy developing its own WebVR applications and demos, including a social WebVR platform called Hubs.”

Mozilla’s mixed reality director Lars Bergstrom said the company is excited about “such big platforms making a bet on WebVR.”

“As new devices reach more people, we expect the WebVR specification will continue to grow and evolve,” he said.

VentureBeat reports that, through Within’s WebVR site, “viewers without VR headsets can watch videos in a 2D form at up to 4K resolution, using a computer’s trackpad or mouse to navigate through 360-degree visuals.” WebVR also automatically detects connected VR headsets, enabling them “to display the VR videos as originally intended.”

Getting VR experiences out to the masses via browsers is limited now to Firefox and Chrome, but not Apple’s Safari. “Within expects that most visitors will reach the site through Google Cardboard-equipped smartphones, but headsets including Vive, Rift, PSVR, Gear VR, and Oculus Go are supported, as is the Android platform.”

All content is currently free of charge and includes experiences based on TV shows “Mr. Robot,” “The Walking Dead,” and “Saturday Night Live,” as well as “musical presentations from U2 and Cuba.” Within is also “accepting VR film submissions through its website to bulk up its small video library, in categories such as animated videos, documentaries, and music.”