Now reaching nearly one billion users, WhatsApp, the mobile messaging startup Facebook purchased for about $19 billion in February 2014, is looking at ways to make money. Until now, it’s been free for a year, and $1 per year thereafter, making it very popular for users outside the United States. In the process it’s become a social network and a way for businesses to communicate with the world. Now, chief executive Jan Koum dropped that $1 fee and has begun to experiment with how to create revenue.

According to Wired, WhatsApp plans to take the same SMS technology it’s refined for users and apply it to businesses that want to communicate with customers. Koum cites restaurant reservations as a potential use: rather than phoning or visiting an app, the user can simply send a WhatsApp message to reserve a table.

“Maybe [the restaurant replies] with three different options and I just tap on a button and the reservation is made,” he said. 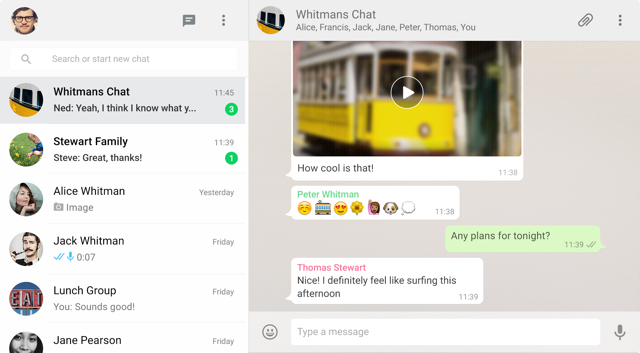 WhatsApp — which is dominant in places like India, Africa and Brazil — isn’t the only company focused on mobile messaging apps. Chief among them is the 800 million-user Facebook Messenger which, with former PayPal chief executive David Marcus at the helm, is also expanding into businesses such as airlines, online retailers and Uber.

In China, Tencent’s WeChat has made inroads in “replacing apps with messaging, offering services from hailing taxis to ordering takeout to paying your bills.” Quartz reports that Slack, the messaging app for businesses, announced an $80 million fund to support development of third-party bots on its platform.

A comScore study that shows that messaging apps presently account for 91 percent of time spent on mobile devices and desktop PCs by users in the U.S. Forrester analyst Julie Ask believes this is the future. “This is going to evolve into a preferred way that consumers engage with brands,” she said.

Koum believes that dropping the $1/year fee will help grow WhatsApp’s user base, perhaps even in the U.S. where Messenger dominates. The company is also expanding the use of encryption on its service and beginning to offer voice calls. WhatsApp could also potentially benefit from Facebook’s CDN (content delivery network), but Koum’s future vision hasn’t been spelled out.