Following months of expanding its LTE data pipes, Verizon Wireless is now offering improved 4G speeds under its new “XLTE” banner. The carrier is introducing improved performance in areas where it has added AWS wireless spectrum. Verizon promises that XLTE regions will feature double the bandwidth and faster peak speeds. The company says that more than 35 percent of devices operating on its network can take advantage of the added capacity of AWS.

Among the devices that are XLTE-ready: the newest Motorola DROID devices; Samsung Galaxy S4, S5 and Note 3; and the iPhone 5c and iPhone 5s. Older devices are also expected to experience faster speeds, since more capacity on LTE will be available when people using the newer devices move over to XLTE. 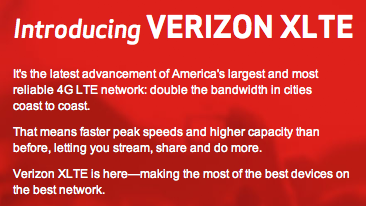 “XLTE adds capacity in neighborhoods or areas where demand is high, especially during busy periods like rush hour, lunch times in crowded areas or during events when mobile data use is the highest,” explains the Verizon press release.

“In 2012, Verizon bought a huge swath of spectrum, the radio waves that carry wireless communications, from the country’s largest cable providers,” reports The New York Times. Nicki Palmer, a chief technology officer for Verizon, “said that in the middle of last year, Verizon started upgrading its LTE cell sites with new antennas and base-station equipment to use that new spectrum, called AWS, which delivers data at faster speeds and for higher capacities.”

“Verizon isn’t the first carrier to fudge wireless standards,” PCMag explains. “T-Mobile led the pack originally by declaring HSPA+ 21, which most other carriers considered a form of 3G, ‘4G.’ Then AT&T defined 4G down to HSPA 14.4, which nobody else on the planet considers 4G. (For what it’s worth, a ‘G’ or ‘generation’ of wireless technology usually involves a major change in the way the network is set up, and a break in compatibility with previous generations. HSPA+ doesn’t have either of those qualities.) Sprint followed with ‘Spark.’ Verizon now has ‘XLTE.'”

A complete list of Verizon XLTE markets is available online.