While much of the fanfare surrounding Ultra HD at CES this week was related to 4K technology and related products, its sibling 8K (at 16 times the resolution of 1080p) also had a presence. Samsung showcased its first 8K screen, a 98-inch QUHD or Quad Ultra HD, while Sharp demonstrated an 85-inch 8K display, in addition to a prototype combined with Dolby 3D glasses-free technology (that delivered nearly 4K resolution per eye, but with a rather narrow viewing angle).

“[The viewing angle] is more narrow in return for increased depth,” explained Roland Vlaicu, Dolby’s senior director of broadcast imaging, who noted the display is still in development. 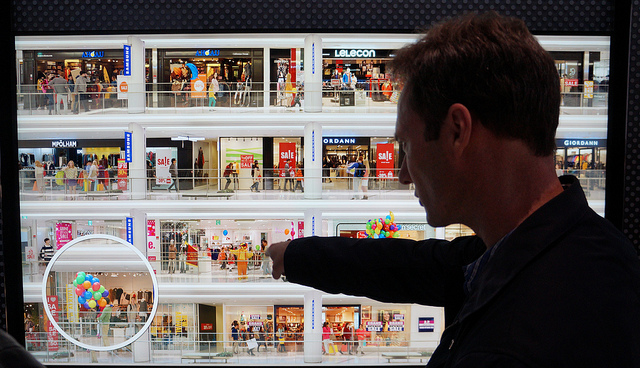 The Sharp prototype was developed in collaboration with Philips and Dolby. It is not the first 8K TV from Sharp; the company debuted its 85-inch Super Hi-Vision 8K TV prototype at IFA 2011.

“Many of the world’s broadcasters and OTT service providers that have been exploring Ultra HD have been looking at the 4K flavor of the format, but Japanese public broadcaster NHK has developed and hopes to implement an 8K  ‘Super Hi Vision’ system,” writes Carolyn Giardina for The Hollywood Reporter. “NHK intends to continue experimenting with 8K this year, and start test 8K broadcasting by the 2016 Rio Olympics.”

While some reports indicate the Sharp and Samsung prototypes will never make it to market, and others suggest we’re about five years away from similar 8K commercial versions, the sets certainly drew the attention of attendees and news media. Sam Biddle, writing for Gizmodo, said the Sharp screen was “so shockingly good” that he “actually felt ill.”

“I’ve simply never looked at a thing like this before,” he writes. “What’s the point in using qualitatives? How many times can I write sharp, clear, gorgeous, and vivid? Human faces look like they’re in front of you, smiling through an enormous science fiction window. Look as close as you want at that crowd scene — there will always be more details. Footage of a dragon puppet looked more ‘there’ than any 3D set has ever been.”