Twitter is unveiling Periscope Producer, a new feature that gives video creators a URL that they can stream to from professional gear, including cameras, editing systems, satellite trucks, VR headsets, drones, games, desktop streaming software and, eventually, 360 cameras. With its new capabilities, Periscope Producer, currently an iOS app, directly competes with Facebook’s Live API, which newsrooms, Web celebrities and others have been using to livestream content to mobile and Internet audiences.

TechCrunch reports that, “eventually Periscope wants to roll [Producer] out to all streamers as well as provide an API for programmatically initiated broadcasts.” 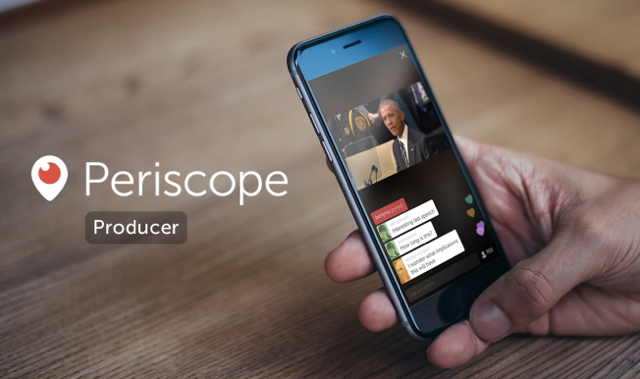 “We’re taking a big step towards allowing any live broadcast, captured on mobile or otherwise, to be piped into Periscope and vicariously Twitter,” said Periscope cofounder/chief executive Kayvon Beykpour, who adds that “Periscope Producer is also laying the groundwork” to serve ads on its streams. He said that making Producer available as a feature in the app, not an API that only code-writers are likely to use, is “the lowest common denominator to giving the most people access to this tool.”

Variety reports that Producer is very simple to use: with Periscope’s iOS app, the video creator points the service “towards a streaming URL generated by broadcast tools like OBS,” and “anything being streamed on Periscope this way can also be viewed as a live stream by anyone using Twitter’s app.” The stream can contain on-screen graphics, picture-in-picture and live feeds from other locations.

Periscope is also “working on enabling users to stream their game play from select iOS apps that make use of ReplayKit, a video relay feature that Apple introduced with iOS 10,” and could potentially “send audience data directly to participating apps to influence game play or relay feedback from Periscope’s audience.”

TechCrunch points out that, although Producer connects to professional toolsets, it “won’t actually help make your video itself look more professional … It’s just a new pipe.” Still, at a time when Twitter has been making content deals with the NFL and other big players, it won’t hurt to open the possibility to featuring other, more polished videos, especially since video itself is “emerging as [Twitter’s] best bet for success.”