During Sunday’s Super Bowl halftime show, about 160 million viewers saw something never seen there before: an army of 300 synchronized drones that morphed from stars to a waving flag above the Houston skyline. That effect was courtesy of the Intel Shooting Star drone system, which also has more serious applications, in search-and-rescue and agriculture among other possibilities. The Shooting Star squad has also performed at Disney World and, last year, set a world record by simultaneously launching 500 UAVs into the sky above Sydney.

Wired reports that, “each drone is about a foot long square, weighs just over eight ounces, and sports a plastic and foam body to soften inadvertent impacts.” The drones can create four billion color combinations via LEDs, and their choreography is controlled wirelessly via a central computer, which double-checks each drone before show time and assigns a reserve unit if a drone has a problem. 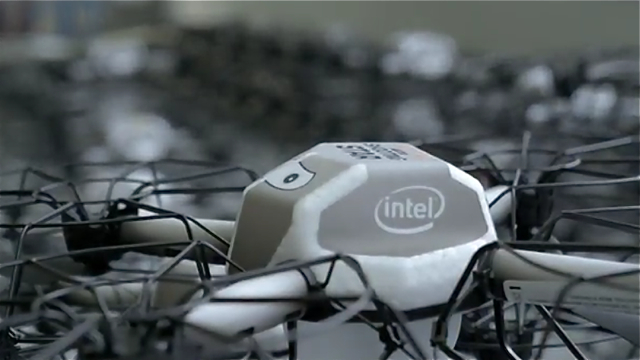 Given FAA regulations and Super Bowl security measures against drones flying within 34.5 miles of the stadium (and over 80,000 people), the Shooting Star team taped the show earlier in the week.

After beginning preparations in early December, Intel engineers, led by Anil Nanduri, got to work, first storyboarding the show, which included a Pepsi logo. Intel and the NFL had mere weeks to get approval from the FAA, which was made more difficult by the fact that NRG Stadium is within Houston Hobby Airport’s air traffic control jurisdiction.

Nanduri enthuses over some of the more practical uses of the programmable drones. “I see them searching for a lost hiker with multiple drones at night with the right payloads looking for them,” he said. “Or search and rescue efforts after a landslide, when it’s hard to get people on the ground.” Commercial applications include using drones to inspect hazardous areas or crops.

TechCrunch reports that one of the Super Bowl ads, for Echo, shows delivery drones restocking a couple’s cache of Doritos — even though the commercial states that drone delivery isn’t available in any U.S. cities yet. When queried, an Amazon spokesperson “confirmed that the drone featured in the Super Bowl commercial was not a new model,” but rather “the same type used to test and make deliveries in the UK commercially last year.”

Amazon has said that the delivery drones they’ve developed thus far should be able to fly autonomously for 10 miles or more, carrying packages to customers in less than 30 minutes.

While Amazon is still working on drone delivery in the U.S., another company, Flirtey, is making deliveries for convenience store 7-11 in Reno, Nevada. Amazon has “sought and attained different FAA exemptions to test and eventually use drones for deliveries, here,” and the FAA, under the leadership of newly appointed Transportation Secretary Elaine Chao, is likely to “evolve rules to enable commercial drone use more broadly.”