The NBA manned point on Thursday at the CES Sports Business Forum with assists from NextVR and Intel. Dallas Mavericks owner Mark Cuban and NBA great Shaquille O’Neal were on hand to share their perspectives on tech investing in sports and more. Sessions featured NextVR’s Brad Allen, Sacramento Kings owner Vivek Ranadive, Intel CEO Brian Krzanich, and others. Sensors, sports betting, and the future of VR broadcasting were among the most popular topics. The event was hosted by Turner Sports and served as a lead-in to their eSports Showcase.

“The Future of Sports Content” session featured Sacramento Kings owner Vivek Ranadive and NextVR executive chairman Brad Allen. Ranadive emphasized that sports content is unique in its immunity to time-shifting, while stressing that the way we consume this content is always subject to change.

Allen focused more on NextVR’s approach to capturing and consuming NBA content. He described VR viewing opportunities similar to those referenced in Intel’s keynote address. Namely, viewers can choose their own perspective and objects of interest, effectively directing the broadcast. Right now this sort of experience is limited to replay highlights, but as processing power increases, one can imagine a real-time version of these offerings. 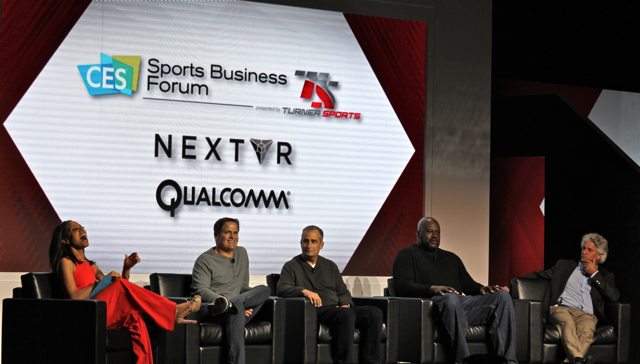 The “Tech Investing in Sports” session kicked off with a discussion of the fan experience. Cuban emphasized how important was to keep fans engaged at the stadium, but that there is a certain ambiance that can never be replaced. Cuban said, “A fan told me he was so excited after one of our wins that he hugged the guy next to him, whom he’d never met. You can’t hug a stranger in your living room.”

But you can give them more data. Intel CEO Brian Krzanich and Cuban both agreed that, if used correctly, the data could add a new dimension to the viewing experience, at the stadium and at home.

Analytics and gambling became a central theme as the session turned to Cuban’s newest investment, Fantasy Labs. The daily fantasy sports (DFS) analytics company is intended to give customers an edge in setting their lineups, but that data could also be used to extend players’ careers.

Fantasy Lab’s analytics don’t stop with traditional sports; it has designs on eSports as well. Having gone head-to-head recently in a “League of Legends” duel (Cuban’s team won), eSports was something both Cuban and Krzanich were eager to talk about. It is the fastest growing spectator sports in the world. Cuban described the sport’s appeal: “Imagine if there were six courts and you could work your way up to Shaq. You can do that with eSports, anyone can play the best in the world.”

There is still some debate over the “sportiness” of eSports, but, as the VR and motion sensor market grows, this likely won’t be a debate for long.