Concert discovery service Songkick will now sell concert tickets directly to music fans. The London-based startup — which, over the course of seven years has gained 10 million active users — will now potentially earn 20 times as much revenue. While the service previously referred users to other sellers, clicking away to another service to purchase was a nuisance and could be impacted by conversion rates. Now, by adding payment information, users can purchase tickets without leaving the site.

“The average American goes to one concert per year. If you double that, it has a profound impact on the lives of artists,” said Ian Hogarth, co-founder of Songkick. However, he notes that it has unfortunately reached the point where it is “easier to buy a taxi to the concert than a ticket.” 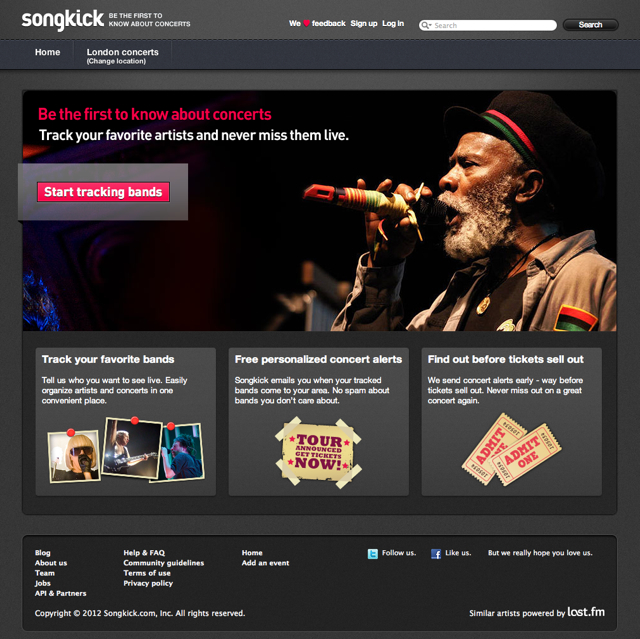 The service cannot go live in the U.S. yet — where 60 percent of its users live — due to exclusivity deals. However, in London, Songkick now sells tickets to a quarter of the city’s shows.

This makes Songkick the second-largest ticket seller in the city. The company plans to strengthen leverage abroad before bringing it to the U.S., much like Spotify did with streaming.

“Songkick still lists links to other ticket sellers so fans can purchase wherever they like, but its slick, native-app buying experience is more convenient than the often messy mobile websites of other vendors,” reports TechCrunch.

Songkick focuses on its ability to personalize data, so users can sift through artists they like and receive alerts about live concerts. Songkick is able to tap into iTunes, Spotify, and Facebook for song information.