Sharp, which became the first to bring IGZO display technology to the mass market in 2013, is showcasing a number of eye-popping display prototypes that may find their way into devices in the next 12 months. Among them, a MEMS display and “narrow border” screens that will further slim down phones, notebooks and tablets. For example, the Ultra High Resolution “Quad Full HD,” or QFHD LCD screen, offers a 15.6-inch 3840×2160 pixel display, four times that of normal HD. 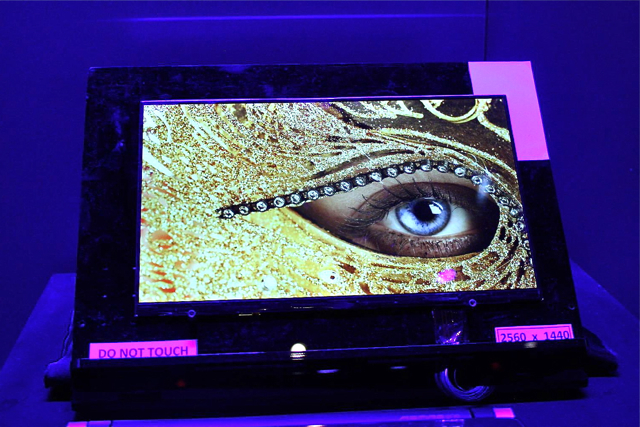 “The target is to make it as close as possible to borderless. We still have to have a slight frame around it for mechanical stability, but the idea is to have the border be a function of that, with the display itself virtually borderless,” said Andreas Niemann, Sharp sales manager.

The technology is made possible by Sharp’s more efficient approach to the display-driving methods that power the pixels.

The company also has a 7-inch WXGA MEMS display. MEMS is a different way to activate the pixel, veering from LC, or Liquid Crystal, to a mechanical shutter system that turns the pixel on and off.

“The color is very vivid, because it comes from an RGB backlight,” Niemann explained. “Unlike LC, the system has no color filters anymore. So the efficiency is way higher than standard LCD, which is great for portable devices because you don’t need as much backlight, so less battery consumption.”

The MEMS response time — the time it takes for the pixel to activate/deactivate — is one order of magnitude faster than LC, Niemann added.

Sharp debuted its IGZO tech at the 2013 International CES, and the ensuing months saw a successful rollout with products including PC monitors, tablets and smartphones from Sharp and a variety of ultrabooks from Dell, Fujitsu and NEC, among others.

Sharp also makes a 32-inch professional monitor for PCs. Due to the limited pixel density of large TV displays, IGZO is not yet being considered for that market.

“Technology-wise, it would be overkill,” Niemann said. “It’s more challenging to make an FHD display for a 5-inch screen than a 50-inch screen. IGZO is ultra high resolution for portable devices.”