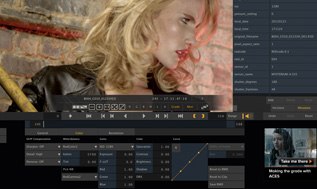 “If you deal with creative media, you play files with a wide variety of freeware, shareware, and paid programs that usually work and can handle ‘that file.’ Some of them only work on PC, some only on Mac. It’s a mess,” contends Assimilate. “Scratch Play is now the answer. Whether you’re on set, in visual effects, or a semi-pro/hobbyist, Scratch Play is your ultimate media companion.”

“The launch of Scratch Play is part of a new strategy for Assimilate, which makes the Scratch and Scratch Lab professional color grading, VFX and finishing systems,” writes Carolyn Giardina for The Hollywood Reporter. “That strategy includes expanding Assimilate’s user base and creating a collaborative environment in the cloud.”

“Scratch Play is just the beginning of a new wave of new products and technologies that you will see from Assimilate this fall,” explains Steve Bannerman, Assimilate’s VP of marketing. “These products and services will include new cloud-based offerings that begin to ‘layer’ value-added services on top of our products that not only make them more feature-rich, but begin to connect them to other users.”

Bannerman says some of the services will be built into version 8 of Scratch, scheduled to be unveiled at next week’s IBC convention in Amsterdam. He also acknowledges “that to a certain degree, Assimilate is going in the direction of Adobe and its Creative Cloud,” writes Giardina.

“There are tremendous benefits to be had by connecting artists whether they’re within the same facility, or freelancing anywhere in the world,” explains Bannerman. “We took the first steps toward that business model with the introduction of rental and subscription licenses this year. Unlike Adobe, however, our customers still have the option to rent for as little as one day, or purchase permanent licenses and site licenses if they choose. We wanted to offer maximum flexibility.”