As broadcasters continue to battle the unauthorized distribution of their shows via Aereo, CBS announced that it has acquired a minority stake in Syncbak, a company that allows local TV stations to stream their content online. Syncbak’s technology enables the delivery of broadcast signals to smartphones and tablets. The service is currently being tested by more than 100 TV stations (including CBS, ABC, Fox and NBC affiliates) in 70 markets. 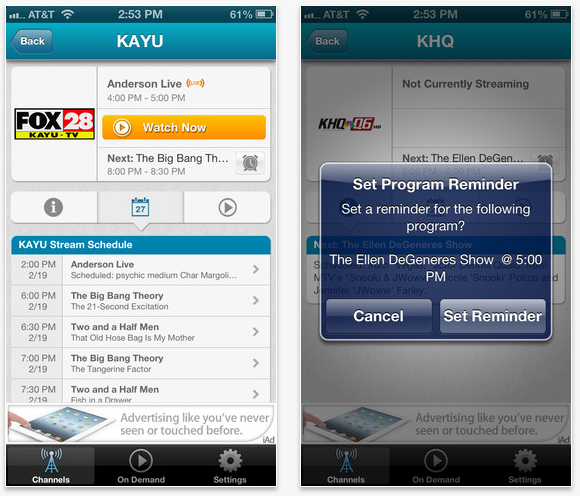 “CBS didn’t disclose the amount of its investment or size of the stake,” reports the Wall Street Journal. “The company’s other strategic investors include the National Association of Broadcasters and the Consumer Electronics Association.”

Broadcasters continue to research potential options as consumers are increasingly accessing content on mobile devices and their habits are becoming more reliant upon Internet streaming video technologies. CBS says it has been working with Iowa-based startup Syncbak during the last few years to explore such an option.

“Across the country broadcasters are looking for the best way to respond to consumer demand for streaming their content,” suggests Jack Perry, Syncbak’s chief exec. “Syncbak’s technology provides the right solution at the right time to make that happen.”

“It isn’t clear how CBS would integrate Syncbak technology,” notes WSJ. “One potential option is to use it to power a ‘TV Everywhere’ service that would allow consumers to get CBS programming on mobile devices once they ‘authenticate’ themselves as customers of a cable or satellite provider that carries CBS. The technology might also work as a direct ‘over the top’ Internet service like Aereo.”

Syncbak’s authentication technology provides stations with more control of their content, which could attract broadcasters as an alternative to Aereo. “By taking local broadcast signals for free and selling them online for $8 to $12 a month, Aereo has rankled the networks,” reports Bloomberg. “CBS and News Corp.’s Fox have both threatened to pull their signals off the air and turn the networks into cable-only channels if Aereo isn’t shut down.”