Twitter, which owns Periscope, is about to debut a way to search via title or topic through the app’s more than 100 years of live video, also offering a list of suggested topics to search. Having launched a year ago, Periscope has accumulated more than 200 million broadcasts — but no way to search them until now. The search function also gives users a list of live streams by people they follow, and allows users to follow videos from a given region. Also new are drone integration and an ability to save live streams.

The Wall Street Journal says that Periscope aims to “create a massive archive of video that presumably would make it easier to advertise against one day, as Web video king YouTube has done.” This follows last week’s announcement that Periscope videos can exist beyond their original 24-hour limit, by typing “#save” when starting a stream. 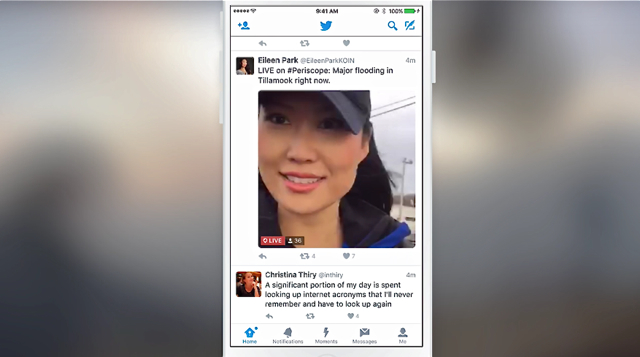 All these moves are due to increasing competition from Facebook, notes WSJ, which “has made live video one of its priorities and is courting celebrities to use its Facebook Live service.”

Periscope has more plans for the future, reports TechCrunch, including the ability for iPhone users to link their broadcasts to a drone. To integrate the drone and GoPro, the user connects via the phone app. Also, within the broadcast, he or she can “switch from your front and back facing phone cameras, a GoPro and/or your drone,” as well as add narration and sketching over the footage.

Once public testing is over, says Periscope, all broadcasts will be automatically saved on Periscope and Twitter, although users can change the option to auto-delete after 24 hours or manually delete specific broadcasts. Adding a hashtag or launching a live stream from a topics page enables users to tag their own broadcasts; in search results, says WSJ, live broadcasts will rank above replays, and the order will be determined by certain engagement metrics.

“When we launched Periscope, people still hadn’t really embraced live video,” said Periscope chief executive/co-founder Kayvon Beykpour. “We wanted to make the experience as delightful and safe for the broadcaster as possible, and one way to do that was to make the content more ephemeral. We’ve moved past that world in a short amount of time and our community has told us they want the option to save their broadcasts. We’re doing it in a way that feels very true to Periscope, and puts the control in the hands of the broadcaster.”