Facebook and Twitter were used in compelling new ways during this year’s Academy Awards for advertising, live blogging and live streaming. Facebook reported an upswing of 21 million global users recording 58 million Oscar-related interactions. According to Nielsen, 13 million U.S. Twitter users watched the Oscar telecast, a 6.5 percent drop from the previous year. However, the show’s overall TV audience in the U.S. dropped by 16 percent, suggesting that the Twitter numbers can still be considered a victory for the social platform. 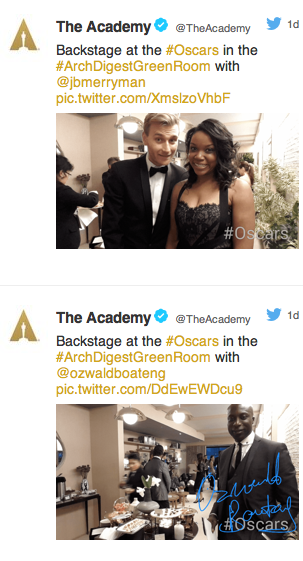 While in the past Twitter has pointed to live awards shows and sporting events as examples of how social TV can drive viewing or second screen interaction, that “message has morphed over time,” suggests Re/code.

“At one point Twitter was trying to argue that it could drive ratings to TV shows, but now it has a fuzzier message about ‘engagement’ — but Twitter hearts TV does seem to have some resonance.”

Facebook, which has been recently making its own push into social TV, says its 58 million worldwide interactions regarding Oscar-related content is up from 25.4 million last year.

“That leap isn’t that surprising given the focus Facebook put on this year’s show, which included live streaming video from backstage,” Re/code explains.

When Twitter releases its own metrics on its global reach, expect significantly large numbers since the platform is unique in that retweeting spreads messages across other platforms and sites, which are seen by logged-out viewers and even non-users.

Twitter has been making this point for some time, that its actual audience is significantly larger than its official 288 million monthly active users.