Now that Barnes & Noble is getting out of the tablet business, the company announced it is launching free Nook Video Apps for Android, iOS and Roku devices. The new apps enable users to purchase or rent movies for streaming and includes integration with individuals’ UltraViolet collections. No longer keeping content exclusive to Nook devices, the retailer has also updated its Android and iOS e-reader apps with the ability to read Nook Comics titles, previously not available outside of the Nook ecosystem. 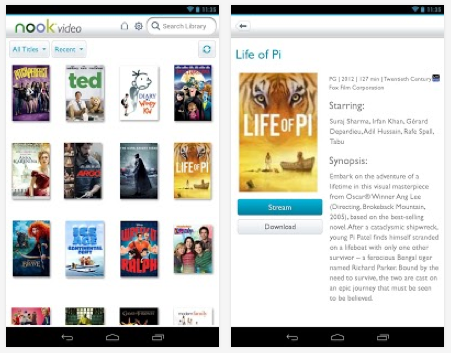 “Nook Video launched with the Nook HD and HD+ in a bid to match the multiverse of offerings Amazon bundled with the Kindle Fire tablets,” reports Digital Trends. “Like Amazon Video on Demand, iTunes, and Google Play Video, Nook users could rent or buy movies and watch individual episodes of popular TV shows. The selection wasn’t as vast as Amazon’s, but wasn’t skimpy, either. Plus, a huge benefit of Nook Video is the ability to access and watch content from the UltraViolet service.”

Now users will have access to streaming content via their Nook HD or HD+, iPad or Android tablet, and other devices. The apps sync across all devices, including smartphones. Titles can be purchased or rented from the Nook Store (no subscription required). Users can download video for offline viewing or stream via Wi-Fi, 3G or 4G networks.

“The apps enable customers to watch movies and TV shows from Nook Video instantly on a wide variety of mobile devices, including iPads, iPhones, Android tablets, Android smartphones, as well as on a TV through Roku streaming players,” the company announced in a press release yesterday. “In addition, customers with the award-winning Nook Tablet and Nook Color will now have access to Nook Video through a specially designed app that will automatically appear in customers’ lockers starting today.”

“Looks like the only exclusive feature left on the Nook HD and HD+ is the interface (and it’s not a bad interface),” suggests Digital Trends. “We may see this crop up on tablets in the future since Barnes & Noble said it plans to partner up with tablet manufacturers instead of developing everything in-house. No word on when that will come to fruition, unfortunately. At least customers who invested in Nook content will be able to access it on other devices.”

Nook Video can be downloaded via Google Play for Android devices and via iTunes for iOS devices.