Nintendo’s Switch, a $300 tablet with wireless controllers, debuts on March 3, for on-the-go gameplay or connecting to a TV. The platform offers a seamless transition between mobile and docked operation, well-designed hardware, a sleek, refined look, with sensor-packed Joy-Con motion controllers that offer vibration feedback and work as game controllers and Wiimote-like wands. But the platform needs a compelling game to “make us fall in love with flailing our arms around at parties again,” and Super Mario Odyssey might fit the bill.

Bloomberg describes that game as “aimed squarely at the exploration-focused collection-heavy 3D epics that are common today,” adding that “having a strong collection of games is critical for driving early hardware sales.” It points to “Zelda: Breath of the Wild,” a title that launches at the platform’s debut, as “one bright spot, but critiques the console’s “limitations in graphics quality,” saying “Xbox One and PlayStation 4 win without a contest.”

The Wall Street Journal says that Nintendo and its new Switch differ from the competition in that “two players look straight at each other, not at a screen.”

“When you play cards, you look opponents in the eye to read their strategy, and that is fun,” said Switch general producer Yoshiaki Koizumi. “And we realized no videogame devices have been able to offer that kind of entertainment.”

“The biggest challenge is persuading consumers that multiple game-playing styles are worth a premium,” suggests WSJ, which adds that Switch’s $300 price tag is “higher than the basic PlayStation 4 and Xbox One packages.” 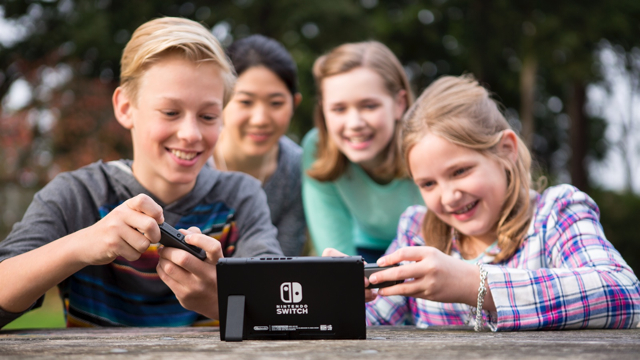 The Switch, which was created “partly as a reaction” to its poorly selling Wii U, will be released with “a collection of games such as ‘Ping-Pong’ that two players can play facing each other.” The Joy-Con controller’s sensors can “read the shape and motion of other objects precisely enough to recognize whether the other player is making the sign for rock, paper or scissors.”

The company now hopes that being able to play games on street corners will go as viral as “Pokémon Go,” which was created by a Nintendo affiliate.

Gizmodo adds more details: the console is region-free, meaning users can play Japan-only games from Day One. The two Joy-Con controllers, small enough to fit in the palm of a hand, feature a joystick and four buttons. “When playing on the tablet you can connect the controllers to each side,” but they can also be disconnected and used separately. And when the Switch is docked to a TV, “the controllers latch together around a giant battery back.” The Switch capacitive touch panel charges via USB-C, with battery life from 2.5 hours to 6 hours.