Digital magazine platform Flipboard has acquired rival app Zite from CNN for an undisclosed amount. Flipboard, a popular cross-platform news reader app, is expected to launch custom magazines linked to a number of CNN shows. It also announced a new advertising partnership with CNN to help monetize combined coverage. CNN bought Zite in 2011 for a rumored $20 million. Flipboard, which generates 2.5 billion page views per month, launched on iOS in 2010 and landed on Android in 2012. 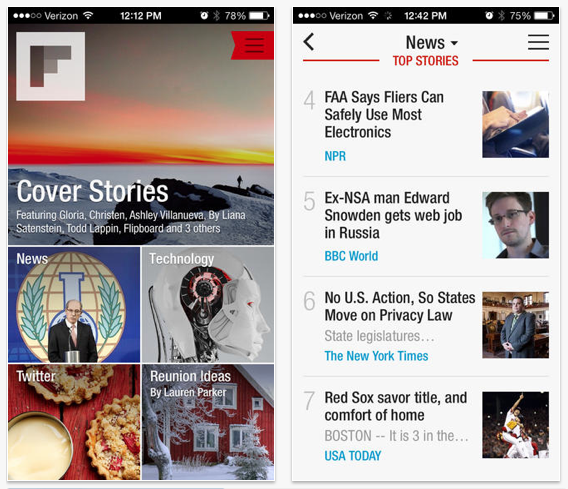 “CNN declined to share Zite’s total active user numbers, saying only that the figure was a lot smaller than Flipboard’s,” reports VentureBeat. “Zite’s main appeal is its technology, which is focused on curating news you care about from sources you like — all of which will eventually get integrated into Flipboard.”

“Flipboard’s acquisition of Zite is notable in light of Facebook’s recent launch of Paper, an iPhone app that has some similarities to Flipboard in terms of both design and content,” reports Digital Trends.

“We acquired Zite from CNN to address something we’ve heard from a lot of you: although you can already read thousands of sources from over 20 regions on Flipboard, you want easier and better ways to discover content about the things that matter to you,” wrote Flipboard founder and CEO Mike McCue on the company blog.

“Adding Zite’s expertise in personalization and recommendations to Flipboard’s product experience and powerful curator community will create an unparalleled personal magazine for our millions of readers.”

Zite co-founder and CTO Mike Klaas said his team is working on a way for current Zite users to transition their data to Flipboard. “We are all committed to creating something ever better at Flipboard,” he said. “I’m not going to lie: I feel a tinge of nervous excitement when I think what we will build together.”