Microsoft TV Dongle Could Be Much Needed Boost for Miracast

Microsoft announced its Wireless Display Adapter yesterday, a $60 device that will allow Windows and Android users to wirelessly send content from a variety of screens to any displays that feature an HDMI input. For example, users will have the ability to send what they are watching on a tablet, smartphone or laptop to a TV screen or projector. The dongle could also turn an HDMI-equipped TV into a Miracast receiver, which may spark competition with Google’s Chromecast and Roku’s Streaming Stick. 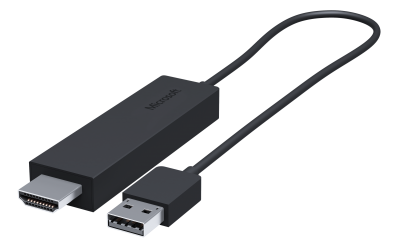 “One of the new features that Windows 8.1 added, and that most people overlooked, was built-in Miracast support,” reports Ars Technica. “With the right combination of wireless drivers and video drivers, Windows 8.1 machines can beam their screen over Wi-Fi to Miracast receivers, enabling wire-free, configuration-free connections between PCs and Miracast-enabled TVs and projectors.”

An increasing number of smartphones and tablets support Miracast broadcasting, but the availability of Miracast hardware on the receiver end — such as TV sets and projectors — has remained a hurdle.

One solution is a hardware dongle. When Microsoft’s Wireless Display Adapter goes on sale in October, it will join a few similar products from the likes of Asus and Belkin already on the market.

According to Ars Technica, Miracast adoption has been hampered by compatibility issues and complaints regarding problematic connections.

“This has left Miracast comparing unfavorably to similar capabilities — but incompatible technologies — from Google and Apple. Google’s Chromecast hardware lets TVs show various kinds of streaming media and browser tabs, and Apple’s AirPlay allows screen broadcasting to Apple TV devices. These both work quite reliably, but unlike Miracast, neither uses common industry standards.”

Meanwhile, Miracast has been gaining traction with Windows and Android hardware, and has some benefits over its competitors.

“First, individual apps don’t need to bake in support as they would with Chromecast; if the device running an app has Miracast, it should work,” explains The Verge. “Second, since Miracast is made possible by Wi-Fi Direct, there’s no need for an actual Internet connection. So Microsoft’s Wireless Display Adapter should theoretically work when there’s no Web connectivity available or in hotel rooms where the connection may be awful.”