Analyst and venture capitalist Mary Meeker has released her annual Internet Trends report, noting that nearly everything is now being optimized for mobile, online video continues its upward trajectory, global Internet user growth is finally showing signs of slowing (as is smartphone adoption), the on-demand economy is healthier than ever, and diversity increasingly matters to the tech industry. Interestingly, Meeker points out that video was responsible for 64 percent of Internet traffic and 55 percent of mobile traffic last year.

In a separate report released by Cisco this week, the company predicts that 80 percent of the entire Internet will be comprised of video in five years.

According to Meeker’s report, mobile viewing on smaller screens continues to gain popularity and now accounts for 29 percent of our time. Facebook, for example, now has 4 billion video views per day. 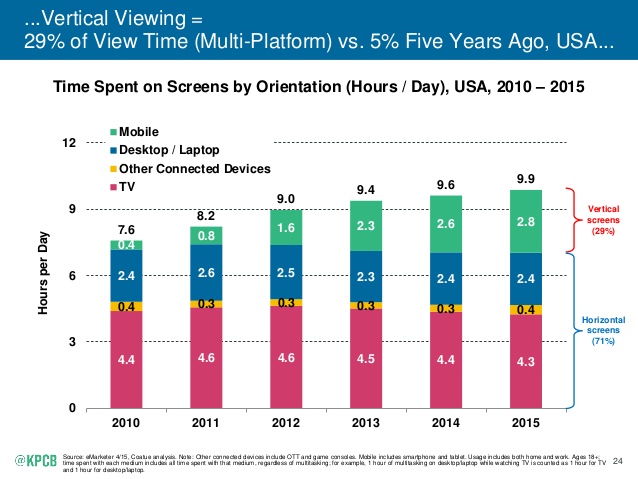 However, Meeker suggests that Internet growth and smartphone adoption are slowing, now that they’ve reached a saturation point — yet there is still room for growth in developing markets such as China.

In addition, Meeker says the on-demand economy is growing, “led by pioneers like the ride-hailing services Uber and Lyft,” reports Wired. “This popularity of such services has helped drive freelancing as a growing segment of the worker population, spurred by, among other incentives, the attractive prospect of flexible schedules.”

Millennials — who are generally tech savvy and expect flexible work hours — are largely leading this charge.