Journalist and ETCentric community member Adrian Pennington forwarded us some interesting news about a possible live broadcasting option for Google Glass. Users of the popular app “Hang w/” can stream live video clips from iOS devices to the Hang w/ site and share the content with friends via Facebook. While the clips are currently limited to streams of three, six, or nine minutes — the technology could possibly be used in the future by Google Glass users for longer broadcasts. 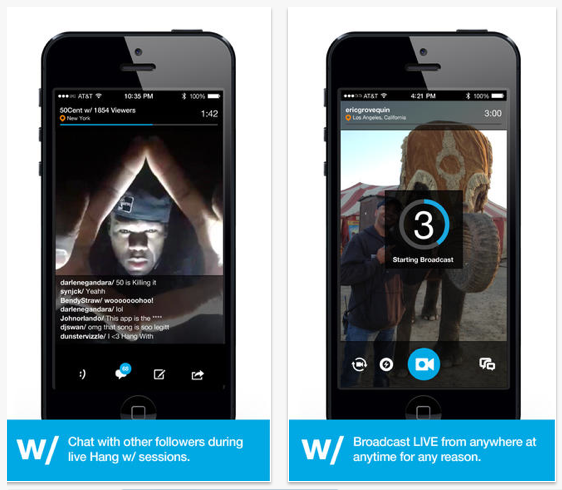 “Nobody has ever built a live streaming platform with the aim of making it a social media platform,” according to Swartz. “We are trying to create an ecosystem with a balance between people who want to share their lives and people who want to watch. And so the various lengths of broadcasts are giving some framework for how to use it.”

“Initially, we launched with only three minutes, because our sense was that a short ‘snackable’ broadcast would be best,” he explains. “But the number one request from new users was for longer broadcasts. and so we added six and nine. We have plans to add longer segments as well. We may also release an unlimited broadcast option for Google Glass, which we see as a revolutionary technology application.”

The Hang w/ app is becoming increasingly popular, with communities of “broadcasters” around the world sharing streams on their profile pages and via Facebook. While video can be re-shared virally, even while streaming live, broadcasters also have the option of hiding clips once they have streamed.

An Android version of the app, capable of six and nine minute options, is being developed.

“Since launch last March, the ad-supported app has been downloaded one million times, and has attracted athletes and celebrities to help promote, use, and invest in it, including Larry the Cable Guy, 50 Cent, Timbaland, and Terrell Owens,” Adrian reports. “NFL wide receiver Owens, who has a stake in MEDL, has clocked 10,000 followers to his Hang w/ broadcasts.”