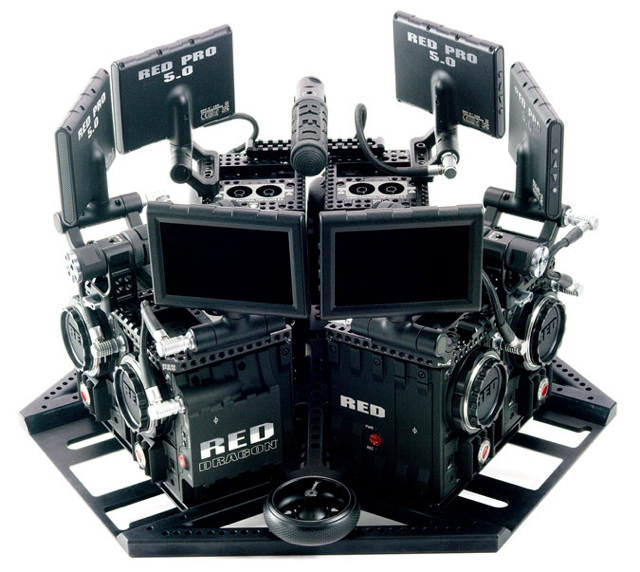 “Having a true professional-grade digital cinema camera system is imperative to help filmmakers and broadcasters create the highest quality virtual reality content possible,” said NextVR co-founder DJ Roller, in the company’s press release. “This system will help produce the compelling visuals consumers expect, as the demand to enjoy these amazing ‘like being there’ experiences expands.”

The NextVR system supports an array of six digital cinema cameras on one plane. The platform on view at IBC (in the RED Digital Cinema booth) is equipped with a fleet of Dragons, RED’s premiere 6K camera. Because a 360-degree image requires recording from all directions, it is likely that the rig necessitates the use of fisheye lenses, according to forums on Reddit and RED’s website.

“The Dragon sensor used in this rig is the finest in the digital film industry,” said NextVR CEO David Cole. “The image quality is incredible. Using the RED Dragon cameras as a basis provides an advantage in resolution, dynamic range, frames-per-second (critical for live sports), low-light performance, and connectivity to broadcast equipment.”

NextVR has more than 17 patents granted and pending for the capture, compression, transmission and display of virtual reality content. The company claims its technology enables content to stream over average home Internet and mobile connections.

“Key to it all is our differential compression and transmission standard that allows different portions of the 360 to be transmitted at varying frame rates and resolutions,” Cole told Road to VR.

The technology behind the new NextVR system is partially based on stereoscopic 3D solutions developed by several of the company’s engineers and producers and used by Hollywood film crews. The system is not for sale, according to Road to VR, but is being deployed by NextVR to produce VR content.

The IBC exhibition runs through September 16 in Amsterdam.