At CES 2018, Huawei made the U.S. debut of its Huawei VR2 headset, which had been announced in October in China. The standalone unit resembles the Oculus or Vive rather than the Gear VR; the user attaches a phone, tablet or PC via USB-C and then enjoys the VR experience at a resolution of 1,600 x 1,440 per eye. The unit also features a 90Hz refresh rate, which reduces eyestrain and motion sickness. The controller, made of the same bright white polymer as the headset, offers a clickable touchpad.

Engadget reports that, “things were much more interesting when the headset was connected to a PC running Steam and a custom controller that combined a pair of triggers with a stationary bike,” with the reporter describing an experience that was more “fluid and impressive than your normal mobile VR experience.” 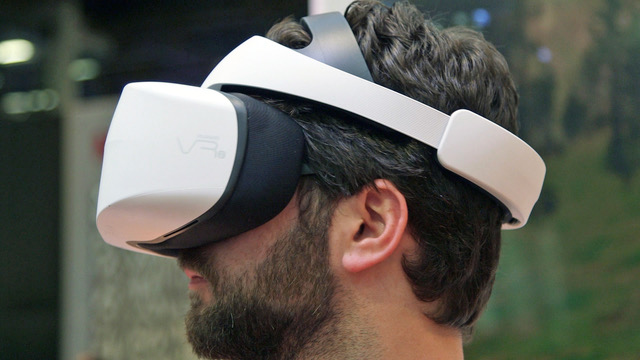 The headset is also very comfortable, since “Huawei has lined the entire inside with soft fabric stuffed with plenty of cushioning.” Huawei did not announce the price or release date.

TechRadar reports that the VR2 can do something other VR headsets can’t: “show off IMAX content in certified fashion.” It also noted that the VR2’s design guarantees comfort when watching for long periods of time. It mentioned that the VR2 can also be tethered to the Huawei Mate 10 Pro tablet, as well as the other platforms listed above.

TechRadar praised the DTS-compatible sound quality, and reported that when the reporter tried out a game with the headset, it “required a VirZoom, the standing bike made for VR experiences.” “It was interesting to see a mobile VR headset working with a executable file run directly from Windows 10.”

With regard to software compatibility, Huawei said it is “working to build up its own library of game titles and experiences” and also plans to “work with Steam and Google Daydream, which is encouraging for those who want access to a more robust library of games.”

The overall verdict is that, “the Huawei VR headset is the Chinese phone maker’s best impression of the Samsung Gear VR using its own Huawei P9 handset” and “creates an immersive 360 experience, even if the phone’s 1080p display is noticeably inferior.”