Disney’s historic El Capitan Theatre on Hollywood Boulevard in Los Angeles is one of five theaters in the world to combine the Dolby Vision advanced laser projection system (created in partnership with Christie Digital) and Dolby Atmos surround sound technology. The facility, which first opened its doors in 1926, now features two Christie 6P 4K laser projectors and more than 100 speakers. Audio engineer, musician and tech journalist Ryan Waniata viewed a screening of Brad Bird’s “Tomorrowland” and was treated to a behind-the-scenes tour of the theater. 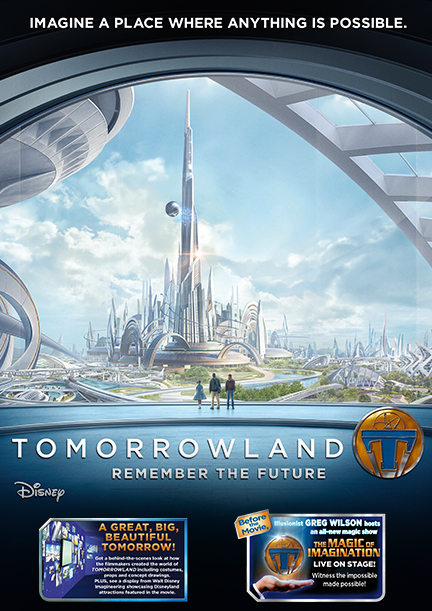 “The image is mixed through myriad technologies and treated by Dolby’s special processing to beam the clearest, brightest, most colorful 4K picture on the planet,” writes Waniata for Digital Trends. “And the resulting picture for ‘Tomorrowland,’ the first film ever mastered for Dolby Vision, is stunning.”

“It’s a brand new way to watch movies,” he adds. “And it’s designed to do nothing less than blow your mind.”

Lasers are beamed through the floor from the basement via fiber piping, capable of delivering up to 31-foot-lamberts. “While Christie has other 4K laser projectors,” notes Waniata, “the image doesn’t become ‘Dolby Vision’ until it’s processed by Dolby’s proprietary technology.”

“That technology includes advanced 4K imaging and the integration of HDR (High Dynamic Range) data, which exposes unparalleled brightness levels contrasting with deep, rich blacks to create an image more in-line with what we see in the natural world. HDR allows for extreme blackouts between scenes, and brings incredible vibrance and realism to moments like a scene in which Clooney’s face is shot right next to a blast of direct sunlight.”

Dolby Vision uses a white screen, rather than the traditional silver, providing a neutral palette that enables a wider range of colors than what is typically offered by standard theaters.

Waniata provides a breakdown of the specific speakers and their strategic positioning behind the screen, on rails along the ceiling, and in the balconies and orchestra section. He cites 76 in total (the El Capitan site references a “completely immersive Dolby Atmos sound system featuring over 100 speakers”). However, newer theater configurations will max out at about 128 speakers.

While the El Capitan does not specifically meet Dolby’s mandate for “Dolby Cinema” classification (due to missing design elements such as luxury seats and a video wall), Waniata describes Dolby Vision and Atmos together under one roof of the charming, historic structure as “something truly unique in the world of cinema.”

The only Dolby Cinemas currently in operation in the U.S. are located in Kansas City, Houston and Alpharetta, Georgia. The company’s partnership with AMC is expected to launch additional theaters soon in California, Illinois, Kansas, New York and Texas — eventually reaching up to 100 theaters by 2024.