Dolby Laboratories, known for its proprietary high-dynamic range technology, is conducting research on how media impacts human beings. The biophysical lab, run by chief scientist Poppy Crum, was established in 2015, growing out of research begun in 2012 to better understand human reactions to audio and video. In addition to aiming thermal cameras at them, the subjects wear a 64-channel EEG cap measuring electrical activity in the brain, heart rate and galvanic skin response trackers and a pulse oximeter.

The Verge reports that Crum’s team is processing the raw data from all those sensors, “using it to potentially inform decisions around how media is produced.” About 40 test subjects from within and without the company form the basis of the research. Dolby hasn’t yet extended its research to work with content creators, but could do so in the future. 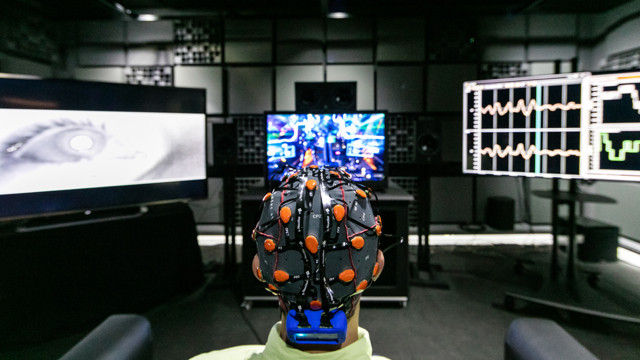 “We’re not trying to tell them that what they’re creating is wrong, but these tools can certainly feed ideas and direction,” said Crum. Dolby has experience in sharing the results of its research, having licensed its HDR techology to Netflix, which is using it to produce “Iron Fist.”

Dolby isn’t the first or only company to engage in this kind of research; Netflix used eye tracking to help it redesign its interface in 2014. With the advent of virtual reality, researchers are “gathering troves of data around how people react to media in a more immersive environment.” One example is Facebook’s Oculus, which purchased an eye-tracking company in December, most likely part of “an effort to understand what people are looking at in VR so Facebook could better serve up ads.”